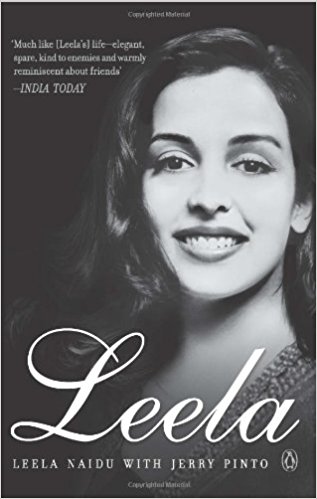 Poet and philosopher Khalil Gibran noted, Beauty is not in the face; beauty is a light in the heart Leela: A Patchwork Life, among other things, reveals precisely this. Radiant, ethereal, stunning, Leela Naidu was the purveyor of beauty for a generation of Indians and foreigners alike. With her sublime smile and feline elegance, she captured the imagination of every man and played muse to some of the worlds greatest artists. Her beauty was immaculate, and did not need Vogue magazine to focus attention. It was however her inner beauty, the magnanimity of her being that only a few were privy to; that has now been revealed to the world, through A Patchwork Life.

Conventional wisdom would conclude that Leela Naidu, the privileged offspring of renowned scientist father Dr. Ramaiah and imminent Swiss-French journalist Marthe, would fall prey to the pressures of an illustrious parentage. But as one reads Leela, one gets the distinct sense that the real Leela Naidu, was in fact, the sum total of a shared and poignant value system.

She imbibed an egalitarian sense of right and wrong, perhaps from aunt Sarojini Naidu. A passion for the arts, from both her encouraging parents. Leela then, was quite simply, a beautiful, whole person. One that possessed the myriad facets that any real human being does. A fair share of talents and strengths, and her full part of demons to grapple with, not the least of which seem to be her longing for her two estranged daughters.

To label Leela Naidu as an actress would be too limiting a tag for this wonderfully talented lady. Mysterious as she seemed, to say she was reclusive would be a gross exaggeration of someone who was rather a free spirit. Leela Naidu was a complex yet simple woman, who embodied the rights and wrongs that we all have, albeit in differing measures. Her love and passion for the arts and music shaped her self-image; her humility, and the soft ease with which she dismissed her extravagant beauty, is very attractive in itself. And that she constantly stood up for the equality of rights and human dignity, leaves a lasting impression, rendering Leela in the most endearing terms!

Aside from Leelas many personal qualities, whats utterly fascinating is the encounters that she chronicles in the book. In typical Leela nonchalance, she takes us on a journey that straddles both geographies as well as people. From a chance meeting with no less than Cartier himself, in an upwardly mobile Paris hotel, to her casual and innocent meeting with Mahatma Gandhi, where she accuses him of not being Mickey Mouse! From serving as inspiration to none other than the Master Salavador Dali in Europe to turning down an enamoured Raj Kapoors four picture deal! From having her Benarsi Saree come undone at the end of a Renoire stage production (present as the legendary film-makers personal guest), to throwing all caution to the wind as she fought for the rightful land of her home-help Angoori in Delhi!

It is rare, an account that is so endlessly enthralling, and ably assisted by well-known journalist Jerry Pinto, so charmingly presented, so candidly written. Even her physical beauty, which by Leelas own admission is a mere genetic gift, giving precedence to all else, is not lost in this account. Interspersed with plentiful anecdotes that clearly focus on her beauty, Leela may try hard to downplay it, but there is just no escaping her profound impact. In one instance, Salman Rushdie is asked to a dinner do and he admits, I didnt really want to but I thought Leela Naidu, so I agreed. This, and many similar confessions make A Patchwork Life a most enchanting read. Because perhaps unknowingly, and long before it was thought possible, or was considered fashionable for an Indian woman to be internationally recognized, even worshipped, was Leela Naidu. Racism and parental yearning aside, she captivated everyone she came into contact with, from Paris to Geneva, Kolkata to Mumbai.

Leelas preoccupations did not, perhaps in the way they would for most women, include the fabulous jewels that her affluent in-laws lavished on her; nor was her priority fame, fortune or notoriety. She seemed genuinely divorced from a lot that we mere mortals struggle with and hanker after. Her concerns seemed to be on a higher plane. To do good work for herself and for others. And to learn, create and grow.

Leela: A Patchwork Life is a thoroughly nuanced insight into the world of one of Indias, and indeed the worlds most refreshing yet enigmatic women. It is enjoyable, uplifting, enriching, and completely engrossing. And if there is one single point that the book proves unequivocally, it is that Leela Naidus transfixing beauty, albeit beguiling to every onlooker, wasnt just the result of her outward appearance. It was in fact the light in her heart that shone radiantly on her face, and mesmerized everyone in her path!