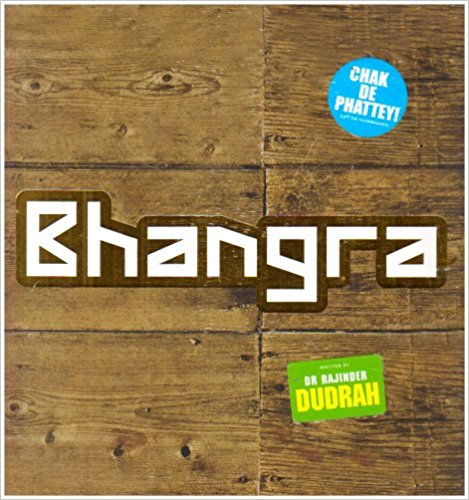 Having had the good fortune to have browsed through the animating ‘Soho Road to the Punjab’ Exhibition, curated by Rajinder Dudrah at the Brunei Gallery, SOAS, in London last September, the journey through his book, Bhangra, was partly familiar terrain. And this slim, attractively designed volume seems to take its cue from just the idea of an exhibition, presenting a heady mix of photographs and informative fact-based text, using interviews, posters, fliers; cassette, record and disc jackets; scanned discjockey playlists and manuscripts to build up a scenario. The innovative get-up of the book and the excellent artwork aptly mirrors the multi-layered, novel nature of the music form. The unusual ‘Bharat Patel’ three-floorboard patterned cover, creatively exhorting the reader to Chak de Phattey (Lift the Floorboards), marks a curious coming together of the coffee table book and the serious research treatise.

It is this cover, with a bright blue sticker ascribing authorship to a doctoral degree wielding scholar that sets the keynote for Bhangra, a book that aspires to accomplish much. This is obviously both a labour of love, written by someone who has had close truck with the form, and a dependable factually mounted study.

Moreover, written by a perceptive member of the Punjabi Indian diaspora, the impetus of the book seems to be to rouse the diasporic audience to its own roots and continuously morphing culture. Interviews replicating Punjabi speech rhythms, scanned manuscripts of lyrics in Gurumukhi, and many other such interesting tactics of giving Punjabi some cultural visual space, are just some of the strategies that awaken it to itself. But in so doing, it also becomes a happy eye-opener for the other non-Asian British audience, sensitizing them to the culture of their diasporic compatriots. Finally, the book speaks to subcontinental readers, the brothers and sisters back home, to learn of the peripatetic developments of an indigenous folk dance form, thus reinforcing kinship with their global, diasporic family. The subtitle on the inner title page, ‘Birmingham and Beyond’ places the book firmly in its context. Sponsored by the Birmingham City Council, the publication of the book hence does service not only to the borough, but also to the diasporic community at large and to the community from where the diaspora took place. This insight into the development of the form in its diasporic avatar is in keeping with the avowal of ‘social responsibility’ on the part of the dance form and its practitioners itself, to bring together, to integrate, to act as a social mirror. These injunctions are picked up by the author and made the soul of this critical effort.

Using the tools of research methodology, the text deploys all possible markers and clues to trace the history of the genre, from its desi genesis, through the development of the form, to alight on its present distinctive British Asian diasporic identity. In the process, the volume achieves something quite unique for the art form. It places bhangra within the broader dimensions of British Asian music, of contemporary British popular music, in fact, of world music, intelligently taking the alibis of ‘written text, archived information and learning resources’. The only limitation is the self-imposed or self-declared one that this is only going to be an ‘overview’. As an overview, it leads on to many allied broader questions, as a good overview ought to. So it is that the volume envisions bhangra as a movement and posits parallels with jazz in being a ‘displaced musical movement’. But finally, the book confidently establishes the dance form as an essential part of the composite UK culture.

Thus, Dudrah sets the growth of bhangra in the context of the larger sociological, historical backdrop, taking into consideration the demographic spread of the diaspora, the sex ratio, the politics. The struggle of the form against prejudicial racist identification with the encouragement of truancy is faithfully documented. In a dedicated chapter therefore, he dwells on the reception of bhangra both by the coloured Asian press and the white press. The deep social roots of the form are highlighted in the unravelling of the links with the wedding market, with the networks of friendship, locality, kith and kin. The postmodern, postcolonial link with the Punjab, giving rise to hybrid entities caught in the ‘between two cultures’ debate, when the youth was unable to decide whether it was British or Asian, is not only reflected in bhangra but in the ability of bhangra music to ‘mix’ with other forms, indicative of the ability of the community to manage a ‘number of different cultural references and identities at the same time.’ With this intention, the book delves into as many aspects of its developments as possible: the position of women in bhangra, about ‘Bhangra’s DJ Culture’, the ‘British Bhangra Live Music Scene’, ‘Bhangra Now’ thus ending up as a considerable social document.

The ease with which the personalized response, through the ‘I,’ the speaking voice from within the experience is integrated with the documentation of data is a follow through from the dual nature of the book. It also becomes an occasion for the author to declare his emotional links with the art form with great warmth, ‘for me to get a ticket was like getting gold dust’.

What the book unfortunately does not give enough space to is the dance that was the originary base of the music form: it does not trace what remains of the original dance form and how far it has moved away and divested itself or retained those early dance movements in metamorphosing from the traditional Punjabi dance and rhythm into its current diasporic state. And it is a fact that now, largely, bhangra pop is a ‘music’ form only. The music-heavy tilt of the textual analysis is more than evident, despite the clever comment and play on the word ‘nach’ meaning dance. Apart from this, a greater rigour in proofreading is recommended for the second edition.

Nonetheless this is a ‘sincerely ordered’ offering which believes in the seriousness of the project, a fact that has found recent public corroboration in the formal recognition of the art form by the award of the Order of the British Empire to Malkit Singh, the original king of British bhangra. The book humbly states that it wants to provide a ‘starting point’ for a considered focus on bhangra. There is little doubt that it has!