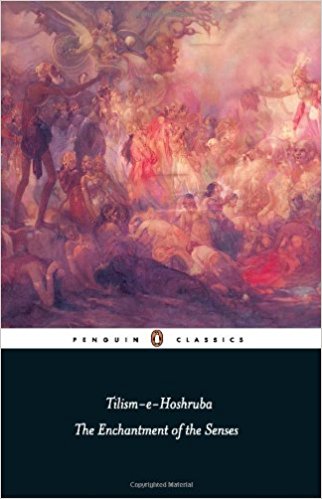 Tlism-i-Hoshruba, an epic fantasy, a part in the long series of Hamza dastans, was in many ways a watershed in the popular Urdu literature of its time and continues to generate academic and popular interest till date. In that it compares with Greek myths or Homer’s epics. In India, Tilism-e-Hoshruba is available in two versions; one based on Persian Rumuz-i-Hamza and the other comprising eight volumes and their enormous web. The eight-volume Tilism-i -Hoshruba was published by Naval Kishore Press, Lucknow during 1881–1893. It was the fifth of the eight Daftars of Dastan-i-Amir Hamza or Hamza Nama, (1881–1917) divided into forty-six volumes published by the Naval Kishore Press. Munshi Naval Kishore decided to publish the Hoshruba dastan first as it was the most popular of all Hamza dastans, and hence made more business sense.

The adventure-cum-fantastic Hamza dastan, broadly known as Rumuz-i-Hamza, was produced originally in Persian. It is not a book but a genre that refers to a large number of assorted oral narratives revolving around the character and chivalrous deeds of Emir Hamza that exist in Persian, Urdu, Turkish, Pashto, Sindhi, Indonesian, Georgian, Hindi and many other languages. The tales ostensibly draw inspiration from the figure of Emir Hamza, Prophet Muhammd’s uncle (treacherously killed in the battle of Ohd at the behest of Abu Sufyan’s wife Hinda by one of his slave). It could also have been inspired by the character and tales of the fearless Hamza, a famous Persian hero. Some believe the grafting of Persian Hamza onto the Arab one was done to create the imaginary legendary figure of the Dastan, a ruler who vanquishes one adversary after another to establish Islamic rule and abolish the prevalence of magicians, sahirs and sorcerers. The popularity of these tales spread like fire in the Islamic world.