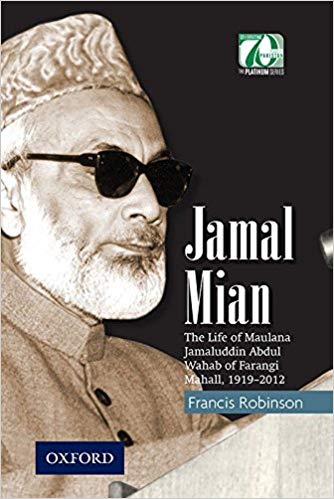 In 1976, two years after the publication of Francis Robinson’s first book, Separatism Among Indian Muslims, he was invited to meet Maulana Jamaluddin, the son of one of the book’s major protagonists, Maulana Abdul Bari, whose alliance with Mahatma Gandhi and the other leaders of the Khilafat movement just after World War I stands as a milestone in the narrative of early twentieth century Indian political history. Jamal Mian, as he was respectfully and affectionately known, was born in 1919 at the height of the movement, just seven years before his father’s death, but he was an authoritative source. He told Robinson that he was pleased that the book had given such a detailed account of Abdul Bari’s role in the movement, but he wanted to correct some errors. One such error, he said, was that his father had not purchased a Chevrolet automobile with money raised for the great anti-imperialist cause; he had received the car as a gift from a close family friend, a wealthy lawyer in Hyderabad. In subsequent publications, Robinson took pains to make clear that Abdul Bari was not guilty of any wrongdoing.

Robinson, in the meantime, was undergoing something of a conversion from the perspective that dominated his earliest project. One of the so-called ‘Cambridge School’, his early research emulated Lewis Namier’s studies of late eighteenth century English politics. To Namier and his followers, changes in political ‘structure’ could be explained by recounting and analysing the self-serving manipulations of patronage, factionalism, and greed—not ideals and ideology. Now however, Robinson took to heart some critical book reviews as well as the example of less cynical historians. And as he became less credulous with respect to the information he had found in British official proceedings, he opened himself to religious beliefs and sensitivities as motivating forces in history. He set about to retool himself as a scholar of Islam, to draw on sources in Urdu, and to immerse himself in the history of Islamic religious scholars. He now came to believe that the ‘the central thread of [Islamic] history … was the work of learned and holy men in making available and interpreting to each generation the central message of Islam, i.e. knowledge of God’s word and how to know it in one’s heart . . .’2 Over the following years of a formidable career as a teacher, editor, critic, and synthesizer of other people’s research, his own primary research concentrated on the history of a family of religious scholars based in the Farangi Mahall, Lucknow, a Dutch merchant’s mansion seized by the Mughal Emperor Aurangzeb and donated in 1695 for the perpetuation of an impressive lineage of religious scholars.

Throughout the 18th, 19th centuries and early decades of the 20th, students had come to Farangi Mahall from far off parts of India and even beyond to study with members of the family. What they studied above all were the so-called ‘rational sciences’, such as logic, mathematics, grammar, rhetoric, philosophy, and legal interpretation, all adjuncts to the understanding of religious texts but also appropriate disciplines for administrators and judges in the Mughal successor states, including some functions in the early British administration. Farangi Mahall scholars and teachers established themselves in many parts of India, and others, schools and teachers, followed the curriculum and teaching methods of the Lucknow example.