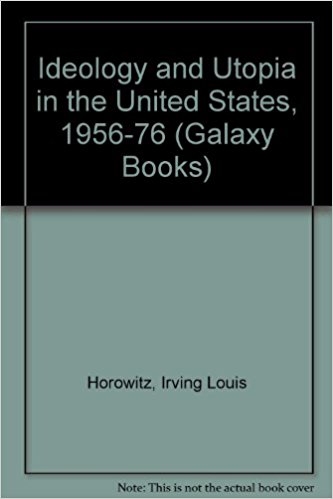 Ideology and Utopia in the United States in 1956-1976 represents the writ­ings of Irving Louis Horowitz over a period of twenty years. Consequently, topics discussed in the book range from the Politics of Assassination to the Revo­lution of Falling Expectations. It is true that the author has tried to give a sem­blance of organization to the diversity of themes brought together between the covers of this book. A total of twenty­-four themes have, for instance, been classified into six broad areas: Presiden­tial Politics, Class-Race Politics, Ideolo­gical Politics, Sociological Politics, Mili­tary Politics and The End of Politics.

However, the bunching of disparate themes under broad categories does not help the reader in obtaining an overview of the American political scene. The interconnections are too tenuous to pro­vide coherence to the perspective one would like to have on American politics. As the author himself recognizes, ‘the route is more circuitous, thereby demanding of the readers a somewhat greater commitment…’. And yet he finds justi­fication for his classification in that it has the ‘advantage of an intellectual journey. It does not gloss over the reality of the moment for the sake of an arbitrary unity; nor does it avoid crucial issues that are lost as a consequence of fading memory rather than real change in the American society.’