All Work and No Child’s Play 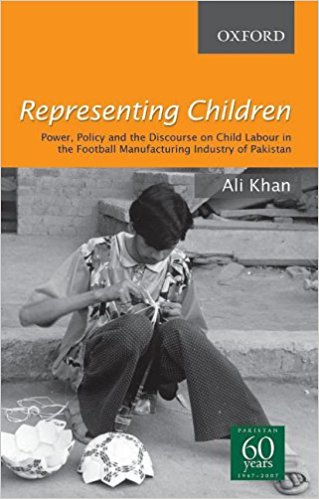 All Work and No Child’s Play
Shakti Kak
REPRESENTING CHILDREN: POWER, POLICY AND THE DISCOURSE ON CHILD LABOUR IN THE FOOTBALL MANUFACTURING INDUSTRY OF PAKISTAN by Ali Khan Oxford University Press, 2008, 221 pp., 495
October 2008, volume 32, No 10

The rapid growth in global wealth has failed to eliminate the scourge of child labour. Millions of children between 5 to 17 years of age continue to be engaged in hazardous occupations, agriculture, daily wage work and are victims of trafficking, child prostitution and other highly exploitative forms of labour. The International Labour Organisation has reported that the Asian and the Pacific region still has 122 million working children in the 5-14 age bracket. Sub-Saharan Africa has an estimated 50 million children engaged in various kinds of economic activities. These children often work long hours and that too in dangerous and unhealthy conditions. Studies have shown that child labour is closely associated with poverty and feeds into multiple survival strategies of the poor. These poor families depend on the economic contribution of a working child to add to the aggregate income of the household. This fact is often cited to justify the cultural bias in favour of child labour amongst some societies and marginalized sectors of population.

The neoliberal policies thrust upon the developing countries have led to several adverse measures, including deflationary policies being implemented, which have led to the loss of livelihood and other support structures of the state. The net result of jobless growth, shift of assets and incomes in favour of the rich and increasing inequality in these countries has made the survival strategy of the poor more complex.