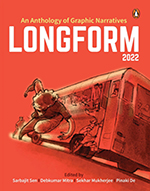 Four years after the publication of their first anthology of graphic narratives, Longform returns with this eagerly awaited second outing, with eighteen texts from India and abroad. This visually and textually provocative collection of stories breaks boundaries and exposes fault lines of the ‘invisible India’ and the world at large, with an unflinching honesty and empathy for all those who fall off the map or are erased from it. The mission in the second anthology remains the same, ‘to subvert conventional narratives’ by portraying ‘ordinary people, autobiographies, travel tales and more’, ‘to take us through round-the-corner dystopias, imaginary cities and kaleidoscopic dreamscapes’ and tell stories with courage, in the shrinking spaces available both literally and metaphorically.

The first strike comes with the cover—a boy running away from a busload of passengers, some of whom seem to be getting off to chase him. The focus is on the fleeing figure, with his body poised and yet in motion, so alive that the lines on the page seem to be on the verge of jumping out of the confines of the two dimensional surface. This image also sets the tone for the texts within, as there is an element of inescapability in all the stories, along with a human desire to flee, escape or at least hide temporarily from the ‘daily drudgery and monotony on the ground’, like the kites in ‘Patient No. 259’.

In keeping with the convention-subverting distinctiveness of this collection, the editors have also contributed their creative inputs, which serve as a preamble to the collection, a graphic disclaimer that foregrounds ‘the bare necessities’ of life; and, a Pygmalion and Galatea moment with a humble flatbread that wants to come to life but is denied this agency by its creator for fear that it will ‘ask for more’. There are also: ‘a pilgrim’s progress’ that has a new spin on Bunyan’s seventeenth century allegory which promised to describe the journey of everyman ‘from this world to that which is to come’; but of course in the graphic narrative universe, these are stories of those not just marginalized from the mainstream but thrown off the planet itself, in a hyperbolic image of displacement, alienation and existential despair; the ‘last rites’ with its indistinct but vivid figures in white; and, the vulnerable, big eyed victim of a ‘fear’ that is most terrifying because of its amphorous and faceless avatars. Like all the texts in this collection, the visual editorial preface is accompanied by a textual gloss wherein the editors iterate their agenda of bringing to the readers stories of ‘poverty, discrimination, domestic violence, and inequality’ to remind us that there is a whole underbelly of suffering out there, closer than we think, that we ignore at our peril. This timely reminder is in fact the opening curve that brackets the book, the ‘Earthbound’ story about the post-apocalypse world being the closing one.