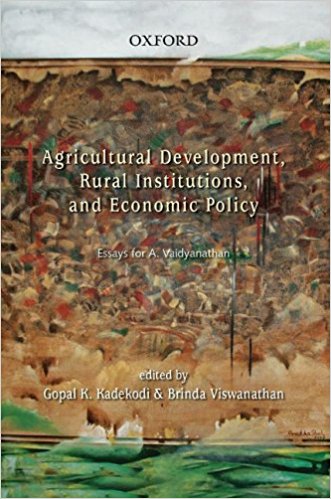 At the outset, the Institute for Social and Economic Change (ISEC) has to be applauded for bringing out a volume in honour of A.Vaidyanathan who served several years both in the Centre for Development Studies (CDS) and the Madras Institute of Development Studies (MIDS). The book deals with the core and critical issues particularly during the post-reform period and offers valuable policy suggestions. In the introduction, the editors recount how the planning strategies have changed over the period and what kind of impact they have made on the society/economy. They have also given a brief sketch of the importance and relevance of Vaidyanathan’s contributions to different aspects of the economy. Finally, they have also contextualized the issues and problems with a brief sketch of the focus in different chapters. The book is thus divided into four parts and broadly deals with three important factors viz., rural credit, irrigation and farm income related to agriculture, non-farm employment democratic transition, and other institutions—governance, public policy and its performance.

The first part of this book deals with three key issues in the agricultural sector viz., farm income, institutional and non-institutional credit market. Rangarajan analyses how the marginal farmers were neglected in the institutional credit facilities at the macro level. He argues that despite reforms in the banking sector and increase of credit facilities during the post-liberalization period, it has failed to reach the marginal farmers. To overcome this problem, Rangarajan suggests a series of policy measures.

Rajasekhar and Suchitra attempt to capture the problems in the non-institutional credit sources, at the micro-level. They analyse the impact of micro-finance programmes on the vulnerability to reduce the debt bondage based on four NGOs, one each in four districts of Andhra Pradesh. They found that the micro-finance programmes are relatively helping to reduce the vulnerability of the debt bondage when compared with the non-members. Despite the NGOs’ role, the other resource endowments of the household are playing an important role in reducing the vulnerability of debt bondage. They argue that the micro-finance programmes are encouraging the income generating activities while ignoring the consumption and emergency needs. They also suggest a series of rectifying measures. While detailing the complexities in assessing the farm income, Ramesh Chand analyses the trend of farm income and Government policies during the post-Independence period. Referring to the decline of farm income in the recent decades, the author suggests a variety of policy measures to increase the same.