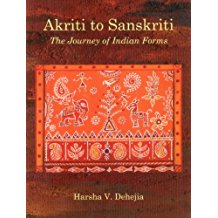 As befits a book that celebrates form in its myriad manifestations, the book is accompanied by beautiful illustrations that buttress the formulations the author sets out to do. In essence, what is stated by the author in the introductory chapter and then subsequently demonstrated through a delineation of specific forms ranging from the rangoli to dance, from textiles to adorned walls, is the Indian penchant for form and its adornments and how it operated as a purveyor of the more opaque and subtle ideals that were not easily communicable or indeed communicated by its self-professed custodians under the brahmanical hierarchy. This is set out in very lucid detail in the opening chapter that explains the apparently irreconcilable balance between form and formlessness, between unstruck sound and its struck counterpart, between timelessness and very strictly marked time.

This is followed by a series of chapters on the multitude of motifs that distinguish and dominate Indian visual and indeed aural imaginary and by offering a semantic explanation of some of these like for example the mandala or the bindu. Admittedly a lot of this is fairly well known but what does mark out the author’s effort is his deployment of categories such as boundaries and rootedness, such as nature and nurture to produce what I would call an aesthetic history of Hindu visual culture.