Aesthetics of a Narrative in Curvature 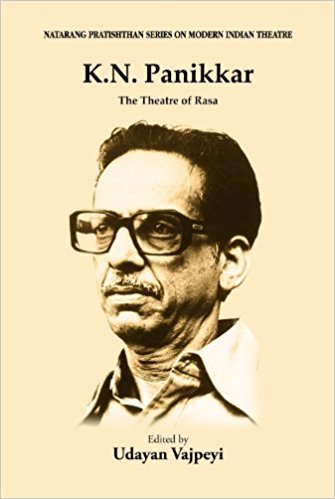 The book under review edited by Udayan Vajpeyi attempts ‘to initiate new areas of interdisciplinary debate and focus critical attention to the interface between theory and practice of modern Indian theatre’, accord-ing to Ashok Vajpeyi, the editor of this series.

K.N. Panikkar is a creative writer, poet and theatre director who evolved his own style, structure, form, methodology and organization. He based his source and resources on traditional performance practices, rituals, beliefs, modes and aesthetics, inclusive of the Natya-sastra tradition of Sanskrit theatre as well as that of rural folk and their expressions. His work embedded international/national political connotations in an attempt to establish the freedom and ‘being’ of the regional theatre as the ‘national theatre’.

Udayan Vajpeyi worked with Panikkar to write a script in Hindi for the production of Uttararamacharitam. This experience had help-ed him in understanding the concerns, priorities, methodology, and process of Panikkar’s work which showcases the spontaneity, powerful and organic flow of imagery and rhythm in the creative process of Panikkar. The book is in two parts plus appendices that lists the timeline of Panikkar’s theatre activities, publications, plays written/directed by him, film songs pen-ned by him and a brief list of awards/fellowships endorsed on him.