Across Spatial And Temporal Frameworks 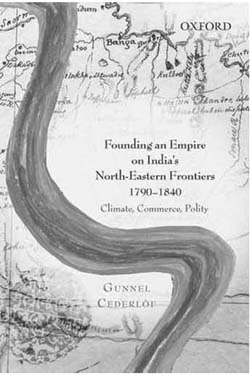 Gunnel Ceder’s Founding an Empire is an important contribution to the historical scholarship on colonial state making in South Asia in general and frontier and borderland studies in particular. Taken together, her earlier works on the interfaces of agrarian, environmental and legal histories in colonial and early colonial South India and eastern Bengal and the book under review on India’s North Eastern frontiers, speaks of the author’s rare ability to traverse a vast landscape across spatial and temporal frameworks. Rejecting the ascription of frontier as an ‘isolated enclave’ at the very outset, Founding An Empire shows how India’s North East was ‘an open-ended affair’ (p. 6) at least until the early decades of Company rule. Arguably, the book lends a certain centrality to the landscape between Bengal and Burma and posits how significant this region could be in reshaping our understanding of early colonial state making.