A Year in the Life of Mohini 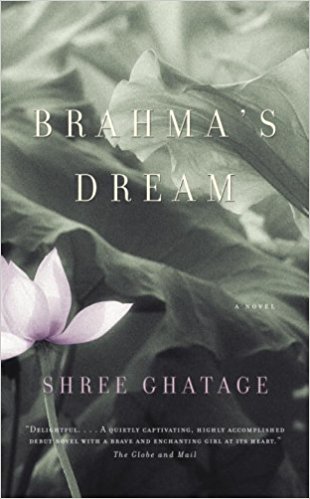 Shree Ghatage (born 1957) moved to Canada in the nineteen-eighties; her first book, Awake When All the World is Asleep (1997) is a collection of short stories. Brahma’s Dream (first published in Canada in 2004) is an unusual coming-of-age story, because the heroine grows up in the shadow of a life-threatening disease. The novel raises philosophical questions about man’s fate, but at the same time gives a realistic picture of members of a Chitpavan Brahmin family living in Shivaji Park in suburban Bombay in the nineteen-forties.

The novel, narrated in the third person, deals with one year in the life of Mohini, the daughter of Keshav and Kamala Oek, born in 1934. It begins when Mohini is twelve years old; earlier events are presented as flashbacks. When she is five months old, she is diagnosed as suffering from an incurable disease. A patient needs frequent blood transfusions to survive. Ghatage uses simple prose, which draws no attention to itself: He informed them that she suffered from a hereditary congenital blood disease called Cooley’s Anaemia.

There was silence in the room. They looked at him without comprehension. “What that means,’ Dr Merchant said, “is that her body does not produce enough haemoglobin.” . . . “The longevity of the patient is anywhere up to three years. . . . Sometimes, in rare cases, it can be slightly longer” (p.23).

The courage with which the joint family rallies to face this situation is inspiring. When she is five years old, her grandfather, Vishnupant, relinquishes his position as professor of history at the university, ostensibly to write a definitive tome entitled India After 1920. “Those around him suspected that he wanted to spend more time with Mohini, who had lived longer than anyone had dared hope.”

Ghatage presents the pain of a young mother, and her determination to do the best for her child. When Kamala asks her husband Keshav to translate into Marathi the notes written by Dr Chitnis about Mohini’s condition, he offers to teach her English instead; the way she makes the time to learn to read and write English is a wonderful expression of maternal love. Her character is also revealed in the way she is strict with Mohini: You want to know why I am strict with Mohini?” Kamala said. “Because, if I allow her leeway on account of her illness, if I allow her to make her abnormal health an excuse for bad behaviour, then it will not be long before she will lose respect for herself and slide into self pity. And if that happened I would never forgive myself. She is only a child and it is up to me to make sure that I bring her up in such a way as to allow her to grow up with dignity and character” (p. 320).

Young Mohini is very intelligent, and grows up “with dignity and character”. She is mature far beyond her years. Because her bones become weak, she has to spend a lot of time resting in bed, and cannot play and run around like other children. She becomes very sensitive to social issues, such as the ill-treatment meted out to widows. Her aunt Vasanti becomes a widow just two years after marriage, when her husband goes to England and does not return; her father-in-law promptly throws her out of the marital home in Nagpur, and Vishnupant brings her back to Bombay. The Oeks are a liberal family, and we can see the slow change in attitudes towards widowhood: whereas the widow Bayabai, of the older generation, wears only a dull sari and shaves her head, Vasanti wears ordinary clothes, and keeps her hair (though she cannot wear flowers or participate in any social functions). Orthodox segments of their society disapprove of his attitude. Vishnupant and the younger generation are also more liberal when it comes to issues of caste—Bayabai does not like to make tea for Keshav’s non-Brahmin colleagues, but he persists in bringing them home. Mohini also gains an insight into wider social issues, like the relationship between the ruling British and the Indians: “It occurred to Mohini that she had not met a single British person even though they had ruled India for over a hundred years. She had, however, met an American” (p. 104). She has “heard of British-only clubs and hotels outside which were hung signs that read, Indians and Dogs Not Allowed” (p. 107). Her unique position as an observer rather than a participant makes her more sensitive to the way historical events like the freedom struggle or the assassination of Mahatma Gandhi affect the life of the individual. We get a new perspective on the reaction in Maharashtra following the assassination of Mahatma Gandhi—the Chitpavan Brahmin community is targeted by unruly mobs because Nathuram Godse was a Chitpavan Brahmin.

Vishnupant invites thirteen-year-old Mohini to join in their discussion when some students come to Koleshwar Nivas. It is then that Mohini hears about the horrors of Partition; a student suggests that people “try and convince themselves that everything is an illusion, a dream.” Mohini asks her grandfather, “If all this is Brahma’s dream, then why is he having such nightmares?” (p. 102). This leads to a long discussion in the family about pain and suffering, about fate and free will. The young widow Vasanti, full of “sorrow and anger at the irretrievable loss of her own unfulfilled dreams”, points out that old Vishnupant “never really did answer Mohini’s question” (p. 124). The remarkable thing is that Mohini thinks primarily of the problems of others when she mentions Brahma’s nightmares, she is not obsessed with her own medical condition.

Ghatage writes in a very accessible idiom. She does not employ too many Indian words, though she uses terms from Marathi for relationships (“Kamalavahini”, “Vishnukaka”, “Aai”) or articles of clothing (“parkar-polka”, “dhotar”) or food (“khadi sakhar”, “chana daal”, “coconut karanji”). At a few places, the details do not sound quite right: “Vasanti would be wearing a five-yard sari. Mohini was glad. . . . nine-yard saris were old-fashioned” (p. 318).

The commonly worn saris are six yards long (not five) and the Maharashtrian sari is eight yards, not nine yards, in length. At another place, she gets a date wrong “It seems there are no wedding halls to be had in Shivaji Park for the fourth of January which Guruji has picked as an auspicious day” (p. 286). Hindu communities all over India avoid the period December 15 to January 13 for marriages, which are held only after January 14, Makar Sankranti.

However, these are minor details, which make no difference to the larger pattern. Brahma’s Dream is valuable not for its philosophical discussions or its picture of society, but for its central character. The novelist gives a vivid, yet inspiring, picture of the pain of this young girl, as she confronts various medical problems.

Shyamala A. Narayan is Professor in the Department of English and Modern European Languages, Jamia Millia Islamia, New Delhi.