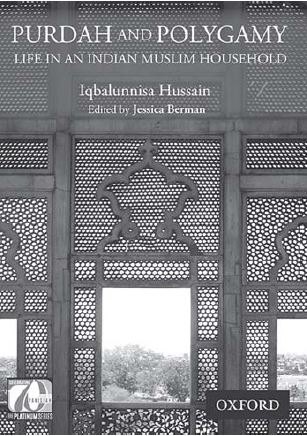 Iqbaulnnissa Hussain (1897–1954) was an educationist, columnist, essayist, social rights’ activist and reformer, championing emancipation and modernization of the Muslim community, particularly its women. Stressing the importance of education, she encouraged coming out of purdah and securing economic independence. Hussain continually spoke up against moribund customs that plagued Muslim society, sponsored in part by quasi-Islamic precepts promulgated by clerics and internalized mechanically by a people lacking education and erudite contemplation. Her newspaper articles and the lectures she delivered at several national and international fora are compiled in Changing India: A Muslim Woman Speaks (1940, Hosali Press, Bangalore; republished by Oxford University Press, Karachi, 2015).Thereafter, Hussain wrote a novel, Purdah and Polygamy: Life in an Indian Muslim Household (1944, Hosali Press). The narrative is a stultifying account of a society that upholds polygyny, wherein women are objectified, where they are perpetrators, perpetuators and equal participants with men in encouraging patriarchy and patriarchal systems. The sanction for multiple marriages in Islam mattered to the modernizing precepts underway in colonial India and was debated by religious leaders and reformists. The freedom to maintain four wives at a time without consideration of the injunctions and obligations regarding equality in treatment is apparently under contestation in Purdah…. Also under contestation then, is the disorderly, unhealthy, confining and incriminating zenana, with its doggedness on purdah and contingent precepts.

The reader is catapulted into the prison-like Dilkusha household where strict purdah is maintained and where, maintaining multiple wives becomes a matter of course. Zuhra is in a monogamous but subjugating marriage with Umar. Tyrannized when she is widowed, she overcomes, assuming the role of a matriarch, controlling her household and her only son Kabeer. She marries him first, to good-looking, wealthy but meek, Nazni who turns out to be constitutionally weak; then she arranges another marriage with the healthy, poverty-stricken Munira on frivolous pretexts. Thereafter, Kabeer surreptitiously marries Maghbool, a good-looking, literate, accomplished and economically secure woman. Kabeer is also coerced into bequeathing property on her before the marriage. Zuhra tyrannizes all three women. Finally, Kabeer marries the poor but pretty Noorjahan convinced that he is performing a sacred duty towards her impoverished family.