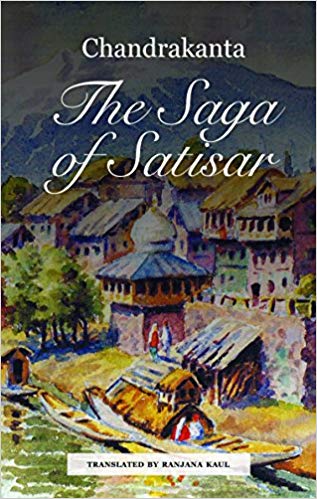 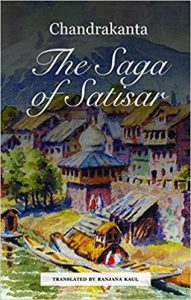 The Saga of Satisar, a translation by Ranjana Kaul of Katha Satisar written by the well-known Hindi novelist Chandrakanta, is epic in scope and proportion. The narrative straddles three generations of several sprawling interrelated and interconnected Hindu and Muslim families of Kashmir. Rarely has any contemporary Indian novel attempted a narration of lives so vivid and richly evoked, ensconced within a sweep of the history and anthropology of a region presented with such a wealth of detail that it resembles Kashmiri tapestry woven with threads of multi-coloured hues and layered with minute design.

The visual richness of the novel casts a spell right from the first paragraph. Set in a Hindu Brahmin home in Srinagar of the 1930s, the opening scene at early dawn with scudding monsoon clouds on the horizon together with expectations of trouble from a political meeting later in the day is full of haunting possibilities. Krishnajoo and Saraswati have been up most of the night. Their seven months pregnant daughter Lalli is being sent to her in-laws’ home for the curd ceremony together with all the expected gifts to the different members of the household, her parents anxious about her safety and worried that the auspicious moment of her departure chosen by their pandit should not slip away. She is sent away in the care of her nurse Khurshid, the tongawallah Rehman and her cousin Nath, even as the clouds pour down rain and surly rioters threaten their safety a little later. Khurshid fends them away, but the reader understands from Rehman’s monosyllabic answers the demands of conflicted loyalties. Within a day, a few hours after Lalli reaches her father-in-law Ayodhyanath’s well-appointed home much to the relief of the extended family waiting for her and for the ritual, news is received of the brutal killing of Madhav, Ayodhyanath’s son-in-law, in the clashes ensuing the meeting.

This scene is just one among scores that present with exquisite visual, cultural and political detail, the interweaving of characters and events with the spiraling contingencies of the times. While Chandrakanta etches the emotional landscape of her characters with fine but deep strokes, so that each figure, especially of the women, is unforgettable, yet as a novel that exhibits an epic sweep, the narrative expands and spreads from Srinagar to more characters set within other families in different villages of Kashmir, Jammu, Poonch and Ladakh. The novelist does not offer to elucidate the connections between her teeming characters, each of these functions within a web of family relations: the reader has to work her way through unfamiliar kinship terms to understand exact relationships. This reviewer was reminded of her Marathi-speaking aunt married into a large Kannada joint family, who took six months to figure out the married couples in the discrete set of people with whom she found herself living. The translator does have a role here, but more on that a little later.

One of the intriguing features of the Indian novel is the way it adapts the form of the realistic novel to accommodate non-western social, cultural and political realities. While Katya, the second daughter born to the pregnant Lalli whom we saw above, is perhaps the most significant character in the novel, she is not necessarily a protagonist whose life’s story forms the central focus of the narrative. Nor is she connected to several situations or characters that form the novel’s many stories: characteristically the narrative is not structured neatly into a main plot and sub-plot/s. The novelist is more interested in her characters’ familial connections with one another, their visceral cultural ties to the mythological narratives that map the geographical terrain of the region, and their implicit vulnerability to the unfolding of larger political realities than in tracking their individual consciousness or the tenor of mundane everyday interactions. Many of its stories offer yet another pattern and shade of colour in the large canvas on which the author is at work: the overriding focus is on the depiction of a community, a region and an age. It follows from this therefore that The Saga of Satisar is a different kind of a realistic novel: as interested in its many characters as in the mythology and the anthropology of the region and in tracing the political history of Kashmir from early medieval times through colonial modernity to fraught post-Independence political tensions and the resulting tragic consequences that continue to this moment in history.

Even as the novelist presents several Muslim characters and their families, yet it is the world of the Kashmiri Pandit community whose impress is felt on the unfolding narrative. Encapsulating the culture, history, myth and rituals of Kashmiri Pandits, Chandrakanta attempts to trace their historical relationships with Kashmiri Muslims, Sikhs, Ladakhis and Dogras. The picturing of many conversations in the novel amongst Hindu and Muslim characters track similarities between the Nehruvian idea of India espoused as the dominant ideology before and soon after Independence, and the syncretic sufi-rishi culture that prevailed in Kashmir. However her inward familiarity with and obvious affection for the cultural life of the community does not preclude a quiet critique of its inherent patriarchal oppressiveness, or indeed its class and sectarian bias. Since the repercussions of such oppressive traditions affect women the most, several interconnected stories portray oppressed and marginalized women, many of whom find the strength to fight back. Education often becomes the mode through which Chandrakanta’s women characters resist Brahmanical patriarchy and one must wonder if they mirror the author’s own personal struggle.

Only towards the end, comprising sections of the novel that narrate violent developments in Kashmir from the 1990s, Chandrakanta’s portrayal of the political situation begins to falter and appear rather blatantly one-sided. She pictures the horrifying developments in Kashmir: the mindless and brutal killings, the kidnappings, the mistrust, the hate and the unravelling of the social fabric, the merciless hounding of Kashmiri Pandits out of their ancestral homes in the Valley to makeshift camps as refugees in Jammu, Delhi and other parts of India. Even as she shows how Muslims and Hindus both become victims of the ideologies of violence, the author’s cultural loyalties perhaps do not allow her to register the equally violent reprisals enforced by the Indian security forces. Here certain passages condoning the State’s excesses, or worse, suggesting that the security forces are falsely implicated by clever and conniving locals test credibility and in the end, the empathy of the reader. These passages however occur only towards the end of the novel which depicts events closer to contemporary times. Calm neutrality and objectivity are perhaps difficult to achieve for those who have suffered untold hardships and humiliation. However, it is always expected that literary narrations attempt to represent the truth with complexity and compassion.

Finally a few points on the translation: The Saga of Satisar must count amongst those works that truly enrich and enlighten. Basharat Peer recounts his visits to bookstores as a young man at college in Delhi and his feelings of shame on the paucity of writings from Kashmir. That Chandrakanta’s novel is now available through this English translation is a true gift to readers who cannot access it in the original. For the most part Kaul’s translation works splendidly in evoking a palpable world that is thick with detail, which transmits a living, breathing reality into which the reader slips in spell-bound.

However, a few lacunae do exist. Despite opposing views on the subject amongst translators, a glossary is sometimes a requirement that completes a translation and the reader of The Saga of Satisar does sense the need for one. To give just an instance, information on kinship terms referred to earlier is a genuine need for the non-Kashmiri reader, as is a graphic representation of interrelated/interconnected family trees. There are a few discrepancies in the narrative: it is not very certain whether these originate in the novel or in the translation. For instance, Katya is Lalli’s second daughter; when she is small, Katya refers to her sister (Lalli’s first-born) as Didda which may not be her given name. However, it is mystifying how Didda disappears entirely from the narrative quite early on and it is not quite clear if she transmutes into a given name, which information this reader definitely missed. A family tree then would have been very helpful given the scope of the novel and the wide range of its characters that are comparable to the Russian realistic novel. Secondly, while Kaul attempts to explain some of the kinship terms within the text: for instance the very English usage ‘Aunt Mangala’ occurs a few times, this ‘English’ rendering of the kinship is not deployed consistently for this variety of relationship nor indeed is the ‘English’ form used uniformly for other kinships ties. Quite inconsistently, towards the end Katya begins to address her own mother as ‘Lalli’. This is quite unthinkable considering that they belong to a very traditional family and society, where such aberrations do not generally occur especially as the older generation ages. All examples given above relate to kinship terms. Obviously a glossary does more: in this case it could have addressed innumerable cultural specificities of food, ritual, craft or clothing given the fact that the region of Jammu, Kashmir and Ladakh finds scarce literary representation and a non-Kashmiri reader is hardly acquainted with its culture. Thirdly, a translator’s note is always helpful in locating the original work and spelling out the reasons for her selection of the text. Generally the translator also usefully discusses the many choices made and the strategies adopted in the act of translation. It is inexplicable that a note from the translator does not find a place in this book.

The last point in this review must perforce focus on the editorial glitches and several proof-reading errors that abound in the work. Even allowing the fact that the novel is dense and detailed, the following example from the book should suffice to indicate the extent of editorial carelessness. Page 468 of the present edition of the novel has Keshavnath discussing with his granddaughter Riddi the Anglo-Sikh War and the two treaties signed with the British, one by the Sikhs and the second by Gulab Singh. Since both treaties were signed in 1846 and Gulab Singh, the founder of the Dogra kingdom, was dead by 1857, it is a bit shocking to learn that Gulab Singh stepped into the flooded valley on 9 November 1946, and indeed to have 1846 and 1946 alternate with the greatest aplomb on the same page some six times. Far too many to enumerate, such typographical disasters mar an otherwise terrific novel. One may only hope that these will be corrected in the next edition.

Rohini Mokashi-Punekar is Professor at the Department of Humanities and Social Sciences, IIT, Guwahati. She is the author of On the Threshold: Songs of Chokhamela (Altamira Press 2005 and The Book Review Literary Trust 2002), Untouchable Saints: An Indian Phenomenon (Manohar 2005) which she co-edited with Eleanor Zelliot, and Vikram Seth: an Introduction (Cambridge University Press 2008). She is currently engaged in translating medieval Varkari poetry from Marathi, an anthology of which will be published by Penguin in their Black Classics series and Jotirao Phule’s play Tritiya Ratna to be published by Orient BlackSwan.