A Treasure Trove of Stories 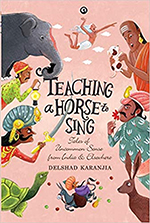 In Teaching a Horse to Sing, Delshad Karanjia ventures on a journey of retelling ‘tales of uncommon sense’ from all around the world, a task that seems as fantastical as the title at first. To enter into this book of wit, wisdom, humour, and most of all, a deep appreciation for the art of storytelling, is to fall down a rabbit hole. Whimsical and fleeting alike, the stories collected in this book are a homage to popular tales that are both cultural and social, whispered across time and all over the world, in similar iterations, lending a universality that is tinged with the local every time a tale is read.

Though her medium is the written, the stories have a distinct oral quality, as if being narrated by someone who, in turn, heard it from yet another someone. Proliferating as such stories are, Karanjia in her enlightening introduction to the book outlines her loving labour of swimming through the immense sea of such source material and the task of choosing and picking stories that finally made it to the current version. All of the stories in the book, though not necessarily always featuring human characters, deal with human nature, the follies of thoughtlessness, the mire of foolishness, the triumphs of modest wisdom, the tempests of jealousy, selfishness and pride, and the clarity of love and acceptance. Karanjia notices that these tales often hinge on cultural assertions of learning from lives of wits and fools, sometimes the same people.

Divided across three sections, the collection spans stories from India and elsewhere, as the subtitle states. The first section, titled ‘The Misadventures of Mullah Nasruddin’, is a personalized history of a life and person who is well known as a ‘wise fool’. Karanjia skillfully draws together anecdotes that still live on from Nasruddin’s life from ‘Turkey to Arabia, Persia to Afghanistan, and Russia to China’, and builds a fictitious portrait of a thirteenth century ‘jack of all trades’. Nasruddin uses language as a tool and indulges in wordplay to create a reputation of wisdom while going through everyday problems and often being the butt of jokes while asking people to laugh along instead of at him. Read together, Nasruddin’s adventures have a moral lesson, that of striving for optimism despite the circumstances with a belief that there is no problem one can’t talk one’s way out of, or as the section ends, laugh their way out of.

From a common man, the collection shifts focus to the adventures of Akbar and Birbal in ‘An Emperor and his Wise Wazir’. This section closely follows the fateful encounter of the two and the legendary years of Akbar’s reign during which Birbal became his most valuable gem. This section narrates quarrels and arguments that people fall into and how a shrewd mind can solve both minor and major disputes. Akbar is extolled as a leader who never stops learning and Birbal a courageous man who speaks to the king without any concern for the frankness of his words. The reader grows attached to the affectionately written characters that Karanjia spins with vivid writing, and it is tragic for the reader that Birbal’s is the farewell that closes this section.