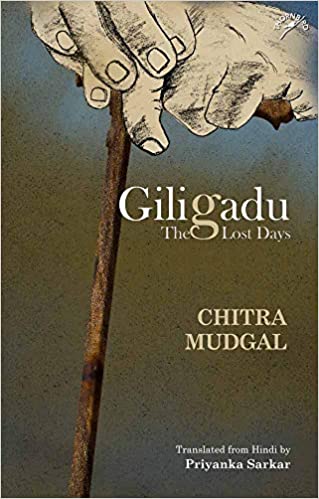 In 2007, when Giligadu was originally published and was available to the Hindi readers, it was received warmly as yet another socially relevant realistic novel by activist-writer Chitra Mudgal. It was hailed as a critical portrayal of the disintegration of family values and a strong criticism of a generation of children who were not willing to look after their parents. The harassment of the old parents, widowers in this story—looking after them just so that their money could be inherited; the unwillingness to have physical space for them in their homes that was just large enough for them, their children and their pet; talking about moving the parents to an old-age home as a practical option—why get emotional about this—believing that parents were too dependent on their children; irritated with them for hanging on to old time values; a zero-sum rapport between grandchildren and grandparents… these and similar others are the delicate issues that have been called out directly in this story.

The story is set in the early period of the millennium as indicated by various non-fictional hints: Hindi news on Aaj-Tak, Rajnath Singh in Uttar Pradesh, the Lok Sabha fight over POTA and Benazir Bhutto’s statements on Kargil. Soon after his wife’s death, Babu Jaswant Singh has moved to his son’s house in Delhi leaving his home-town Kanpur. Being given a balcony room to be shared with the family pet, a room where the window-panes opened into another’s apartment, and being looked after rather reluctantly by a daughter-in-law who had the ‘superpowers to brainwash his son’—this movement into another city and home has its share of evident perils for Jaswant Singh who was ‘born in the house of the talukdar of thirty-two villages’.