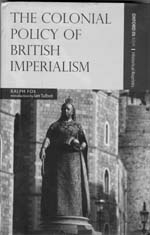 The young author of this book was born in Halifax UK in 1900 and died fighting in the Spanish Civil War in 1936. In a short and rich life Fox not only became one of the founders of the Communist Party of Great Britain but gained a well earned reputation as a novelist, social historian, journalist and translator. Having studied modern languages at Oxford, Fox visited the USSR in 1920. Soon after he identified himself with the growing international Communist movement which was inspired by the successful Bolshevik Revolution. As an active British Communist, Fox joined the International Brigade on the Republican side in Spain through the French Communist Party in 1936 serving as a political commissar to the British Battalion. He died on 28 December 1936 on the Cordoba front while organizing a machine gun position under enemy fire.

Talbot informs us that a ‘posthumous memorial’ of his brief experience in Spain, establishing the ‘myth of his death’, was published as Ralph Fox: Author at Arms in March 1937. In a matter of a few years Fox achieved what numerous seasoned academics fail to achieve in their long, secure and mostly bourgeois lives. He contributed regular columns to the Sunday Worker and the Communist Party’s Daily Worker during the 1920s and became a co-founder of the Left Review in 1934. His biography of Lenin and works such as Genghis Khan, France Faces the Future and the highly acclaimed The Novel and the People became well known during his lifetime. Ralph Fox was a true Communist scholar; his life and heroic death epitomize Marxism as a philosophy of praxis.

This book contains all the formulations which have become the guidelines for a Marxist understanding of the economic and political history of colonial India since the 1930s. It anticipates the more comprehensive and better known India Today written later by the British Communist historian R.P. Dutt. The work, ‘is intended as a political tract and not as a “balanced” academic study. It thus does not rely on footnotes or references. Rather it is a reflection on the understanding of the British Empire and its manifestations primarily in India, and to a lesser extent elsewhere from the intellectual framework of socialism. Its value lies not in the information it contains, but the insights it provides into this type of understanding at the time it was written’ (p. xi). While this description is correct we wish to point out that the book amounts to much more than ‘insights’. Written decades before the birth of subaltern historiography in India the volume exudes an exceptional passion which drove the author’s scholarship, life and eventual death. Fox’s deep sympathy for the working classes in the colonies is evident in almost each paragraph of his narrative while his understanding of the working of international capitalism has stood the test of time. Talbot’s short introduction, and brief it must be given the size of the volume, contains a biographical sketch of Fox and sums up the main arguments of the book. Nonetheless, the introduction would have been more interesting if Talbot had chosen to mention certain aspects of the book to which this review draws attention.