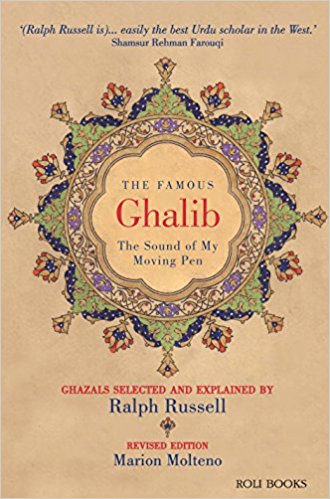 Mirza Asadullah Khan Ghalib (1797-1869) is one of the great poets of the world and certainly nineteenth-century India’s greatest Urdu poet. Even after one and a half century of his death his reputation is not only intact but grows with every passing day. The reasons are several, the most abiding being that there is a certain metaphysical and existential core to his poetry that will never get dated despite the technological onslaught of modern times. In voicing his personal concern about faith and existence and the angst of his age he also articulated certain fundamental anxieties of our own age and those of every thinking man.

Ralph Russell taught at the School of Oriental and African Studies, London and was one of the most reputed scholars of Urdu studies in the West. Mir and Ghalib were his life-long preoccupations and he has added a substantial body of writings on them along with his collaborator, Khurshidul Islam. Their book, Ghalib: Life and Letters (1969) is one of the most erudite and comprehensive books on the poet. The book under review is a revised and enlarged edition of its predecessor, which was published during Ralph Russell’s lifetime in 2000. Seven years after his death in 2008, Marion Molteno has edited this revised edition mining the substantial corpus of Russell’s writings and putting together his most valuable insights on the genre of the ghazal and the poet Ghalib. It has been written to introduce Ghalib to the uninitiated reader in English. It is divided into two parts.