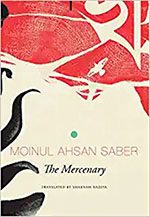 So this was how they ought to be taught a lesson. This wasn’t an issue with major or big leaders though. They understood the present. They knew which way the winds blew, they knew that politics required different kinds of actions. One could compromise and reach an understanding with them.’

Located in a fictional village near Dhaka, The Mercenary is Moinul Ahsan Saber’s attempt at satirizing the political unfolding that led to the creation of Bangladesh, erstwhile East Pakistan. The main events in the novel take place in a marketplace or ganj, allowing the work a spectatorial gaze and the events a dramatic effect that lets the characters walk in and out of the scenes, without any significant shift in the geographical terrains in the novel. Ironically, while the setting may seem to be constant, a significant shift takes place at the macro level wherein the country gains independence from West Pakistan and re-establishes a linguistic and cultural identity. The satire that runs alongside the course of events reveals the hypocrisy of bureaucracy that exercises its vested interests while wrapping it in a language of people beneficial ideologies.

The novel begins at the centre of disorder in East Pakistan in 1971 when political uprisings from mukti bahini or the freedom fighters of Bangladesh formed guerrilla forces against the rising dominance of West Pakistan. As news of Pakistan Army plundering houses in the East and unleashing violence even on civilians spreads across the first few pages, one gets a glimpse of how frequent mention of inhumanity occurs in the novel. However, what one is not prepared for are the graphic details of a newly-wed woman being raped by a Pakistani officer, which eventually leads to her death. Or two mukti bahini boys who are repeatedly tortured in the prison cell and then in public, to be finally tied to a pole with broken bones and bleeding wounds, as they wither towards death. The mere brutality and the publicity of torture reveals the barbaric nature that Saber wants to highlight as a commentary on political upheaval that dehumanizes the marginalized through the actions of bureaucratic officers.