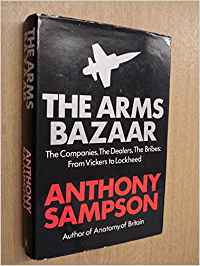 The international trade in arms has reached alarming proportions. Some $5 billion worth of military equipment has been transferred to Third World coun­tries each year during this decade. The trade is unlikely to reduce, since the fervent desire of the arms-producing countries to sell is matched by the eager­ness of recipient countries to buy. Gre­asing the wheels of this trade are contact men, high-pressure salesmen, corrupt politicians and others, who lurk around governments, armed with bulging pocket books. The international trade in arms has been compared to the international trade in drugs, with its manufacturers, addicts and pushers comprising that sorry commerce. There is a paucity of literature on the international arms trade: no doubt the secrecy of its functioning inhibits infor­med writing. Works on this subject fall into two separate categories. There are scholarly works which would interest basically strategic analysts and the arms control community. The writings of Geoffrey Kemp and Amelia Leiss need especial mention here. Their seminal work is contained in a three volume Arms Control Project undertaken in 1970 for the Centre for International Studies at the Massachusetts Institute of Tech­nology.