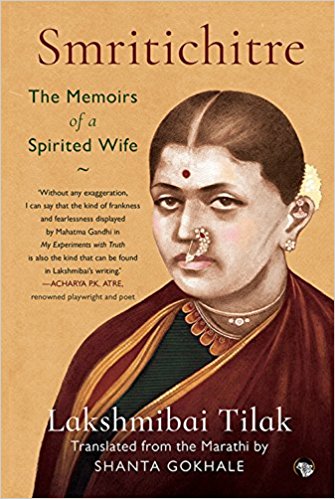 I start with a confession—I am half Maharashtrian, speak Marathi fluently, understand the ethos of that culture thoroughly, and yet I have only a nodding acquaintance with Marathi literature, having come to it very late in life. Therefore, I had not read Smritichitre before this and was delighted to be asked to review it. However, when I mentioned to my Maharashtrian side of the family that I was just not able to get into the book even after reading about a hundred pages,  there was outrage, indignation and curt dismissal—’What will you English speaking types understand!’

I realized then that there must be something wrong with the way I was approaching the text. Yes. Indeed I was—stumbling over inconsistent use of kinship terms–Attyabai for father’s sister and Granny for grandmother on the same page, Aunty and maushi (one general and one specific),  some literal translations which worked very well most of the time but some idiomatic expressions in English which jarred… There was much more to Lakshmibai’s account than this I told myself and I was determined to find the golden grains of wheat hidden in the ears.

From then on it was a greatly enjoyable experience.

So who was Lakshmibai Tilak? Born into a Maharashtrian Brahmin family of Jalalpur, near Nashik in 1868, Manikarnika, or Manu, was the brought up by her father’s sister Attyabai. Why? Because one day when Lakshmibai’s mother and Attyabai, were standing on the steps of a temple, her mother promised Attyabai who was childless, that the next child she bore would be hers. Not only did she and her four siblings spend a lot of time at her Attyabai’s place, they preferred to be there than at home because of a very strict, almost eccentric father! At eleven she was married off to a young man, Narayan Waman Tilak, who was making a name for himself as a poet and orator. After Manu’s marriage she was given the name Lakshmibai, and Smritichitre is an account of Lakshmibai’s life with the poet, translator, teacher, accountant Mr Tilak (not to be confused with Bal Gangadhar Tilak, who gave us the slogan, Swaraj is my birthright.). Mr Tilak was one of the earliest converts to Christianity and it was a difficult journey for him as well as his family until Lakshmibai also converted and was able to join him in his social work.