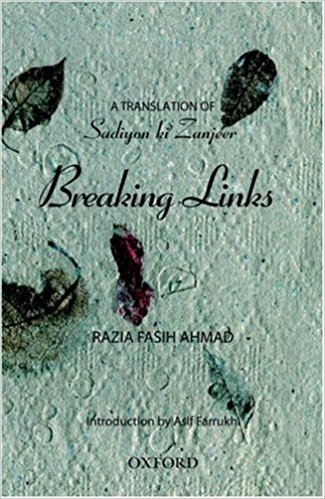 Curled in the end lies a beginning and in every beginning lies the end of something old. Never is this truer than in the case of countries that are born after prolonged periods of parturition or when they are hived out of old nation states after much blood has been shed. Bangladesh has had not one but three partums: the first in 1905 when Bengal was spliced into East and West Bengal, then in 1947 when fresh borders were drawn on the Indian subcontinent and the new wing of a new nation state called East Pakistan came into being, and the third in 1971 as Bangladesh was to be its final coming, an assertion of a proud new identity by breaking all links with the past. Razia Fasih Ahmad’s Breaking Links is a valuable addition to the small, almost minuscule, body of work by Pakistani writers on the disintegration of Pakistan. Except for a handful of authors such as Intizar Husain, Masood Ashar and in recent times Sorayya Khan in her debut novel Noor, there has been a tacit silence on the subject of what went wrong with the two-nation theory.