A Political Party at the Crossroads 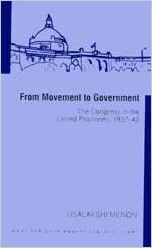 Visalakshi Menon has given us a fascinating story of a political party at the crossroads. Having spearheaded an anti-imperialist movement and had its cadres languish in colonial jails, it debates whether to assume office and eventually forms governments in eight provinces of British India. Some significant questions arise. What impact will this new role have on the old one? Will the party give up mobilizing for movements and concentrate on administration? The British Government was sure the Congress would “study moderation” and forsake movements in the future. That, after all, had been the premise behind the Government of India Act of 1935 – to divert the energy of the Congress from revolution to constitutionalism and reduce its influence by bringing in the princes as a countervailing force in the Federation. The Congress was equally emphatic that far from becoming a constitutional party it had accepted office with the objective of wrecking the constitution from within!  Who would be proved right?