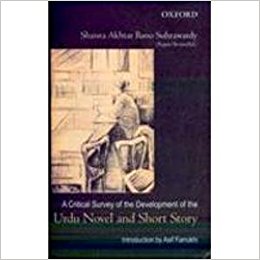 A Pioneering Work
Rakshanda Jalil
A CRITICAL SURVEY OF THE DEVELOPMENT OF THE URDU NOVEL AND SHORT STORY by Shaista Akhtar Bano Suhrawardy Oxford University Press, 2007, 250 pp., 495
May 2007, volume 31, No 5

By the early nineteenth century the Urdu language had perfected and polished itself to such a sheen that it shone like burnished gold. It had honed its vocabulary to express the noblest emotions and refined its syntax to convey the most complicated expressions with ease and finesse. As a language, it had come of age. The ghazal, the qasida and the marsiya—each an exquisite literary genre, each capable of surpassing the other, each the cause of much astonishment and delight—were the most glittering jewels in its crown. But the novel and the short story were still waiting to be born. At a time when some fairly sophisticated fiction was being written in English, French and Russian, the Urdu fasana-go was producing what could, at best, be described as a picaresque novel. Slowly, almost imperceptibly things began to change as realism began to creep in and some semblance of plot and characterization began to emerge. Slow to gather literary force, the Urdu novel and the short story gradually began to overshadow the other far more stylized genres proving to be not just more malleable but also more ‘open’ to the needs of modern literary sensibilities.