A Novel with a Contemporary Flavour 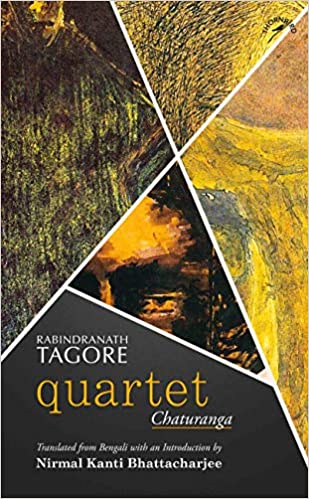 Originally serialized in the magazine Sabjupatra in 1915, Rabindranath Tagore’s Chaturanga (Quartet) is a short novella set in 19th century Bengal. Later it was published in book form in 1916 and is considered a landmark in Bengali literature. A quartet carries four squares of space and Tagore was fascinated by the Bengali quatrain, the classical four-part musical form. The story of the novel follows the journey of a young man named Sribilas (the narrator), his meeting with his best friend, philosopher and guide Sachis, the story of Damini, a widow, and Jyathamoshai (Uncle), an idealist. As the title indicates, the novel consists of four chapters, each named for these four main characters and raises pointed questions about religion and atheism, a recurrent idea in many works of Tagore. It also deals with another significant theme—the complex hues of the man-woman relationship. Thus the text can be studied from two different perspectives—the eternal debates about religious ideology and the true path to salvation that plagued Tagore, along with his ideas about woman’s  liberation. The second significant aspect is the writer’s unique experimentation with the narrative style where the language is crisp and minimalist, often comprising disjointed sentences.

The story revolves around the four pivotal characters with just one woman in the midst of three males. The protagonist Sachis is a tormented soul who is torn between natural human longings and a forced imposition of spiritual emancipation.