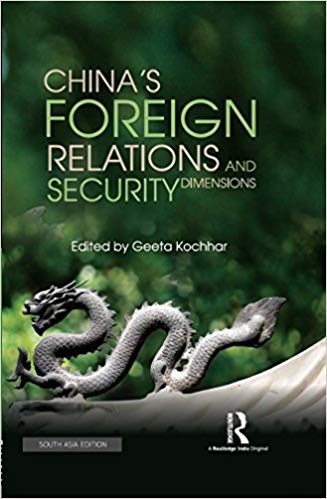 A changing geopolitical scenario in the Indo-Pacific and certain domestic issues facing China has made the country clutch on to its nationalist fervours more strongly than before. The Chinese leadership has substantially upped its economic and military power. There is a greater yearning for national glory—exemplified by an assertive protection of China’s interests both at home and abroad. While at home the leadership is increasingly centralizing power at the national level, abroad China is pursuing a foreign policy based on massive foreign exchange reserves and developmental projects. It has led to lopsided foreign relations marked by asymmetrical trade relations between China and other developing countries. In this context, analysing China’s foreign policy objectives and perspectives is crucial to address the challenges that comes with being in China’s neighbourhood.

China’s Foreign Relations and Security Dimensions represents a diversity of attitudes that the Indian academia holds towards China and its foreign policy. As India and China are gaining economic heft, the focus of the world has shifted to how the world’s most populous countries are strategizing their international relations and power dynamics. As it is an edited volume, the authors address various issues underlying China’s domestic affairs, like its domestic public security, climate change negotiations and the conflict it faces in its north-west frontier—Xinjiang. The authors also take a stand on China’s multilateral behaviour by assessing its ‘intimidation and coercion’ strategy in the South China Sea and growing expansionism in the energy sector. What forms the bulk of the content is however, India-China relations. From underlying political dissonance over issues ranging from territory—land and water—to geopolitical influence in the Indo Pacific region, India and China have certain pressing issues which prevent their relationship from improving. The editor has correctly pointed out that though the present leaderships in both the countries are striving to keep trade and border issues separate, economic cooperation is invariably getting negatively affected. As looking back at the past is important to understand present bilateral ties, the authors have traced the trajectory of India-China relations—right from the time of Mao and Nehru to the current leadership.

The authors have sought to unravel the mindset of the main Chinese leaders; they cover the whole canvas of China’s foreign policy working—right from the time of Mao Zedong to that of the current President, Xi Jinping. As Geeta Kochhar says, ‘the dissection from post-liberation to pre-reform, and the continuum from post-reform to present, is a long journey of readjustment and realignment in China’s foreign policy’ (p. 2). There is further discussion on the evolving relationship between China and its neighbouring powers. Though the book has touched upon a wide array of economic, political and social issues, there are certain topics which were glossed over. For instance, India is just one out of several interests China has in South Asia. The balancing act played by many of the South Asian countries between China and India is both interesting and important, which is missing in the book. Another oversight is not addressing China’s commitment to the Paris Agreement in its climate change negotiations. China is not just following directives, but is involved in norm-making, which is not clear in the book.