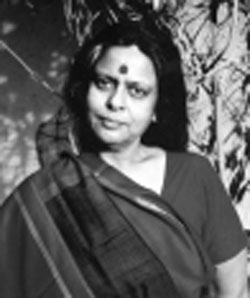 Indira Menon was born in Madras, and spent her early years in Bihar where her father was posted. With her sister Kalyani, she later went to live with their grandparents in Madras, where her grandfather, Sir K. Ramunni Menon, had them placed under the tutelage of Smt. T. Brinda, who taught them Carnatic music in 1944–1947, a period she later described as the best years of her life. She called Brinda the ‘eternal teacher’, and some of her qualities that she describes so movingly would be recognized in herself by her own students of economics, of music and of remedial English—her instinct for lacing learning with laughter, her decided opinions, her patience. Her recollections of her grandfather, whom she credited with having made music part of her being by subjecting her sister and herself to nerve-wracking sessions where he asked them to identify the correct among two alternative renderings, convey the same combination of humour, warmth, awe that was peculiarly hers.

Her sister Kalyani, in a touching passage in the memoirs she wrote for her son, talks of how she used to feel that everyone pampered Indira because she was the younger one, but later decided it was because Indira herself was so loving.

In 1947, she came to Delhi to visit her parents and younger sister Narayani, and it was here that she contracted polio. In the process of trying out various treatments, her schooling was interrupted until 1951, when she joined the Convent of Jesus and Mary. In the meantime, unable to come to terms with a world without music, she got her mother to arrange classes for her and to accompany her to every concert in Delhi. She also took classes in Telugu to understand the text of the compositions of her beloved Thyagaraja. It was only in her last years that she said she had always suspected it was the weakness of her lung caused by the polio that prevented her voice from developing properly. In her teens she was so busy fiercely trying to do all the things her friends were able to do, she had no room for self-pity. She learned to ride a bicycle, to enjoy knitting and embroidery, to compose fine photographs. In school she found friends whom she could talk to for hours about Dickens and Austen.