A Journey with a Purpose 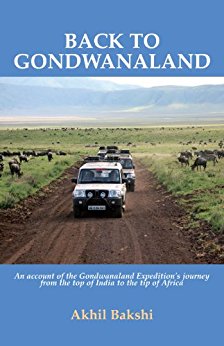 A Journey with a Purpose
Prabhu Ghate
BACK TO GONDWANALAND: AN ACCOUNT OF THE GONDWANALAND EXPEDITIONS JOURNEY FROM THE TOP OF INDIA TO TH by Akhil Bakshi Odyssey Books, 2010, 480 pp., 395
December 2010, volume 34, No 12

Back to Gondwanaland: An Account of the Gondwanaland Expeditions Journey from the Top of India to the Tip of Africa is a highly entertaining and educative account of a three month expedition by a team of about ten persons from different disciplines driving three Scorpios through sixteen countries that lie between Iran and South Africa, in 2006. (The vehicles had to be shipped to Iran because Pakistani visas were not forthcoming). Akhil Bakshi has a lively and fluent writing style and a sense of humour which not only stood him in good stead as the team leader who had to deal with hungry border officials, nosy intelligence officials, and in one case a breakdown in the middle of a trackless desert, but also helps the reader get through this rather long book (470 pages) divided between fourteen country chapters and three Annexures.The sixteen countries are Iran, Turkey, Syria, Jordan, Israel, Egypt, Sudan, Ethiopia, Kenya, Tanzania, Malawi, Zambia, Zimbabwe, Swaziland, and South Africa. (India gets two pages in the Iran chapter because the top of India turns out to be a visit to the Jakhoo temple in Shimla, after which the expedition drives down to Delhi to fly to Teheran).

There are interesting descriptions of people, places, landscapes and adventures, but also potted recent histories of the countries the expedition passed through, for which the author must have done a lot of reading. I found some of these very useful, helping me sort out my dynasties, civilizations, presidents, revolutions, rebel groups, civil wars and so on. The book is full of interesting vignettes such as the meeting with Mugabe, and the burqaclad professional girls loitering by the highway in Iran who go through instant temporary marriages after getting picked up, to escape the dire consequences should they get caught. Or the encounter with a man selling ivory souvenirs in the Sudan hidden under his robe who turns out to be a policeman (was he trying to blackmail the author, or was he just moonlighting?) and the Russian pilots who dropped bombs on the southern rebels in the Sudan in the morning and then dropped food aid on them for the UN in the afternoon! The text is interspersed with plenty of photographs. One of the biggest lacuna however, since this is a travel book, is the absence of maps. It is frustrating keeping track of all the place names the expedition passes through and not being able to follow visually the route it took. A few maps were all that were required (the map on the inside cover is much too small scale and indistinct).