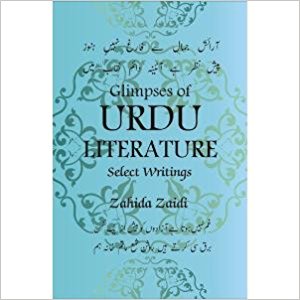 Zahida Zaidi says that she has not attempted a work on the history of Urdu literature in this endeavour. Notwithstanding, I would argue that she has subconsciously ended up providing a very fine outline of the same in the course of writing this book. The treatment of Urdu poetry in the book is exhaustive and comprehensive. Indeed the opening chapter of the book, Secular and Humanist Traditions of Urdu Poetry, discusses the evolution of Urdu poetry in detail with a view to tracing the emergence and growing refinement of the different genres and themes of Urdu poetry masnavis, ghazals and marsiyah. As for themes and personal inclinations of eminent Urdu poets, she has chosen some of the finest representative poets of the different times and sensibilities ranging from the likes of Mir Taqi Mir, Nazeer Akbarabadi, Mir Anis to Hali, Josh and Firaq and woven a fine historical outline of Urdu poetry through centuries.

The author has evaluated Ghalibs ghazals in an unique freshness. It requires more than ordinary scholarship to describe or interpret Ghalibs complex idiom and his diverse imageries. Zahida has dealt with the multidimensionality and a broad emotional range of Ghalibs poetry. She has articulated the profound and philosophical aspects of Ghalibs personality and the social and moral landscape around him to understand the resultant universal appeal that his poetry came to acquire.

The author has devoted three chapters to the poetic works of Allama Iqbal; the first one dealing with the centrality of nature in Iqbals poetry. To her, Iqbals passionate involvement with nature lay at the root of his creative vitality and immensely shaped his artistic perceptions and intuitions. Yet again, the author has quite successfully captured the different susceptibilities of Iqbals poetry and identified the elements of naturalism in it on different themes and contexts, ranging from his early romantic poetry to more metaphysical and profound ones in the subsequent phases. She has provided English translations of parts of appropriate poems to contexualize Iqbals propensity to use rich natural imageries and captures the vitality and complexity of Iqbals mind. However, in this part, she seems to be exercising her own poetic sensibilities in making a rather critical assessment of some of Iqbals works. In the same vein, her critique of Iqbals Shikwa appears to be very harsh and direct. Putting it in comparison with Halis Musaddas she regards Shikwa as a piece of literature that lacked depth of feeling and sure sense of direction. Nonetheless, she discusses both Shikwa and Jawab-e-Shikwa in good detail and provides explanation of different sociopolitical contexts that prompted Iqbal to undertake such an endeavour.

The chapter on Faiz Ahmad Faiz commences with a brief note on the ascendancy of the Progressive movement in the world of Urdu poetry and quite appropriately places his poetry in that context. Zahida narrates, not without necessary criticism, Faizs poetic journey amidst the contemporary sociopolitical turmoil and elaborates on his freshness of perspective and revolutionary idealism. The treatment of his nazms remains rather sketchy but the spirit of it is captured beautifully with some intelligible translations and simplification of his metaphor and language.

Among other prominent Progressive poets, the author devotes two chapters to Ali Sardar Jafri and Makhdoom Muhiuddin respectively. While Jafri is eulogized for his striking rhythmic patterns, bold and apt imagery, the latter has been acknowledged to be a popular and influential progressive with no rival except Faiz himself. This part of the book amply explains the rising prominence of the Progressive movement in the subcontinent and how Urdu poetry now ceased to be dominated by romantic themes and came to realize its true potential in terms of expressing the ideals of revolutionary idealism, international peace, humanism, etc. She has devoted one chapter each on Akhtarul Iman and Munibur Rehman. She has made a sensitive appreciation of the love poems of Akhtarul Iman while the focus of her attention for the latter has been his poems of sorrow and nostalgia.

Zahida Zaidi provides summaries of some of the representative fiction writings of Urdu literature of the 20th century. By explicating the major thrust of Munshi Premchands Maidan-i-Amal, which comprised of his acute analysis of the problems of rural India, she has made it intelligible to a vast readership. Her description of Khwaja Abbass Inquilab successfully brings forth the multidimensionality of the novel which apart from a political and historical account also betrayed khwajas autobiographical influences. There is equally lucid articulation of different themes and issues that pervaded the fictional writings of Anwar Azeem and Pegham Afaqi.

The study of women in QuratulAin Haiders fiction has been given due importance. The two novellas by her namely Agle Janam Mujhe Bitiya Na Kijo , and Seeta Haran have been taken up by the author of this book to underscore the issues related to the deprivation of women that were freely taken upon by contemporary fiction writers.

In its approach towards the genre, it is mainly descriptive but does a marvelous job by allowing the reader to engage with the fictional writing in Urdu literature.

The last part of the book which deals with modern Urdu drama helps us to dispel the misconception that the language has not produced any drama of any significance. Zahida Zaidi has tried to remind us of the finesse with which the plays like Anarkali by Imtiaz Ali Taj and Yahudi ki Ladki by Agha Hashr Kashmiri were composed. She has also highlighted how the Progressive movement with its revolutionary spirit tried to use drama as a genre for the articulation of their ideology. A brief history of the genre brings it up to the rise of Naya Theatre under the aegis of Habib Tanveer.
Nadeem Shah is with the Department of History,Jamia Millia Islamia.

Literary Evocation of a Place and People
September 11, 2017