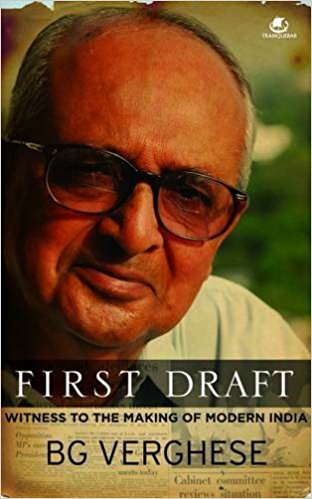 Once upon a time, and not very long ago either, Bahadur Shah Zafar Marg in New Delhi where several large and small newspapers have their offices didnt used to be as horribly crowded with cars as it is now. From 1982, when I first went to work there at the Express Group, until 1987 when George (as underlings like me called him when he was out of earshot) worked there, you could count the number of cars on your fingertips.

One of them was Georges, a cream coloured Fiat parked opposite the Express Building, slightly to the right. It would get there at 9.30 am and go away at 6 pm. In those days editors didnt have to hang around till midnight to reinforce their handsonimage which, in my opinion, is a manifestation of their insecurity. You were influential because you were the editor; and had authority if you had a record of intense morality with an ability to distinguish between right and wrong and stick to your decision.

B.G. Verghese was one such editor and I had the privilege of working as a leader writer in economics for the Indian Express when he edited it during 198287. The only things I learnt from him in those eight months were discipline and the ability to stay focussed. To write 375 word editorials on large subjects, you needed both.