A Glimpse Of The Future? 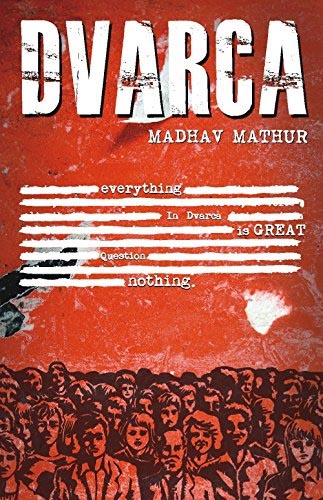 Imagine living in a country where the state decided everything about your life—the number of kids you have, how you get pregnant, how much food will be rationed to you, your profession, your language and religion. Given the times we are in globally right now, the prospect perhaps does not seem too unusual an occurrence in the near future. Madhav Mathur has however succeeded in painting a scary picture of such a mechanized, dystopic society, which, much like Margaret Atwood’s The Handmaid’s Tale or George Orwell’s 1984 talks of a futuristic world, different from today, but sadly, no longer an improbability. Of course, the novel is not as iconic as either of these two novels, (even such a comparison may seem wrongly placed) however, weaving deftly between mythology and science fiction, between the past and the future, Madhav has succeeded in carving out a slow but gripping tale for his readers.

‘Think the same act the same be the same’—that’s the premise of the land that is Dvarca. The similarities with Dwarka, the holy land, is deliberate. In contrast to the land of Krishna and his kingdom, the fictional Dvarca is a land where the uniform is the norm. Difference and diversity is frowned upon. All characters are named after characters from Hindu mythology and identified by the wristband given to each of them denoting their position in the societal hierarchy. Each name has its genesis in a story from Indian classical tales or mythology.  And they are generic rather than individual. So boys are either Nakuls—defenders, Vidurs—thinkers, Gandharvas—accountants or Narads—creative thinkers, who are, by the way, being gradually phased out and made extinct. Young girls are all Miras, who become Jyotis after marriage. The main job of the Jyotis is to carry the ‘jyoti’ or light forward by giving birth to the next generation. However, in this futuristic world, there is no room for love and sex. Artificial insemination occurs in the laboratories of the male Vishwamitras. Scarily enough, this is also a world where FOE or freedom of expression is being challenged. Dissenting speeches are automatically converted into lists of fruits and vegetables, reality TV shows do not show song, drama or dance, but incite mob violence towards dissenters, and abuse of women in western wear.