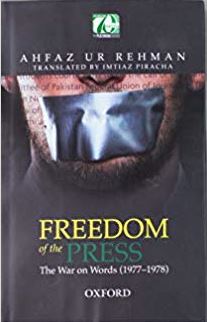 Media freedom has come under threat in both India and Pakistan, most explicitly during the Emergency period in this country and during the Zia ul-Haq years in Pakistan. While these interregnums may now appear to be forgotten, in both India and Pakistan old threats—like state censorship and repression—continue to remain even as new ones have surfaced and they include online intimidation and even assassination. The killing of Syed Saleem Shahzad outside Karachi in 2011 or that of Gauri Lankesh in Bengaluru in 2017 are cases in point. Yet these life and death issues hardly disturb the journalistic status quo. With trade unionism within the media sector all but dead, editors functioning more like managers than anything else, and media establishments embracing market-driven business models, it should surprise no one that defending and enlarging media freedoms are ideals that have been forgotten, or deliberately overlooked.

The book under review, Freedom of the Press:The War on Words (1977-1978), a volume brought out to commemorate 70 years of Pakistan’s formation, is no scholarly tome. It seems incomplete and often appears little more than notes in a diary. Nonetheless it is a rare record of a journalistic movement which took on the might of the Pakistan military state. The story of a protest, conducted under the banner of the Pakistan Federal Union of Journalists (PFUJ), is narrated by one of its central figures, Ahfaz ur Rehman, who was then General-Secretary of the Karachi Union of Journalists and an active PFUJ member. Beginning as a localized struggle against the military dictatorship’s assaults on newspapers and journalists, it quickly assumed the proportions of a movement, attracting the participation of a wide section of society. A quote attributed to The Times of India recognized the resonance it once held: ‘Had there been an organization like the Pakistan Federal Union of Journalists in India, Indira Gandhi wouldn’t have dared to impose emergency rule.’

Army rule in Pakistan quickly extinguished the import of Quaid-i-Azam MA Jinnah’s observation that ‘the Press …can guide and instruct public opinion.’ It was the military dictatorship of Ayub Khan that promulgated the notorious Press and Publications Ordinance in 1963, and arrested prominent editors, including the poet Faiz Ahmed Faiz, then chief editor of Pakistan Times. Those times were a dress rehearsal for the Zia years, and the author recalls how as a member of the National Students Federation he himself had taken part in protests ‘nourished’ by the humanism in the work of Sahir Ludhianvi and Krishan Chander.