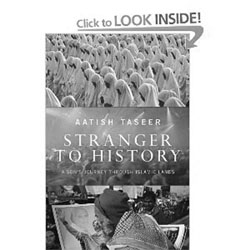 Stranger to History is the story of a dual quest. It is the account of a son’s journey to find his father and of his efforts to discover the
roots of his faith. The reader accompanies the young man in his discoveries of mind, faith and philosophy in the heartland of Islam from Istanbul to Damascus and from Mecca to Tehran. The final destination is Pakistan, where the two quests merge. It is a stream of consciousness in a kaleidoscope that is part travelogue and partly a philosophical quest. And partly autobiography. It is an intensely personal account, transparent in the innocent honesty of its observations and in the earnestness of its desire to comprehend. The author’s odyssey crosses the turbulent waters of the angst in Islamic countries today which are a subject of international concern and query.

He follows his charted course and offers his observations and understanding. They may not be, and are not claimed to be, complete, but nevertheless offer windows of understanding on a fraught subject. The same is true of India and Pakistan, the twin heritage from which Taseer claims descent.

Aatish Taseer is the son of an Indian Sikh mother, a professional, and a Pakistani Muslim father, a mercurial politician of the PPP, once close to Benazir Bhutto. His parents separated when he was an infant. The theme of the son’s efforts to get to know his father, despite the latter’s evident disinclination to reciprocate, runs through the book.