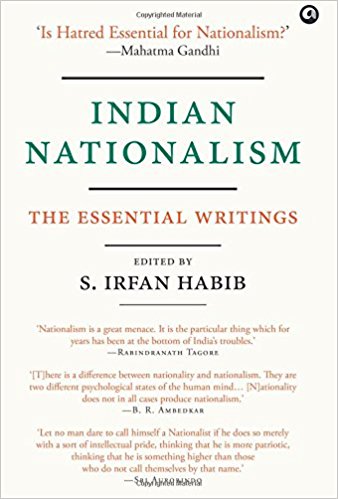 Indian Nationalism: The Essential Writings edited by S Irfan Habib is a timely intervention in the cantankerous debate on nationalism that has been raging unabated in the country for some time, especially since the Modi regime came to power in Delhi. This comprehensive anthology brings together carefully selected excerpts from known and obscure writings and speeches of twenty-three men and women of eminence—freedom fighters, reformers, intellectuals and even scientists—who had the unique distinction of shaping and articulating the many shades of nationalism from its inception in the nineteenth century to mid-twentieth century.

S Irfan Habib minces no words about the purpose of this book. It is set against the backdrop of what he calls the ‘times of hyper-aggressive nationalism’ where the invidious binary of the national and anti-national has increasingly purged all nuance from public discourse and popular imagination on the subject.

The rising tide of a narrow, exclusive and a militantly majoritarian nationalism in the recent past has manifested itself in ugly ways and put unreasonable demands on citizens to prove loyalty for the nation in demonstrable ways. Slogans, flags, anthems and a gaudy display of military might have come to define nationalism presently under the aegis of the state. The country has seen a spate of communal killings, instances of mob lynching and an alarming subversion of institutions central to the functioning of any democracy. Another disturbing development has been the spawning of ‘embedded’ media houses—all colluding to propagate a skewed version of nationalism based on the hatred of the ‘other’ at home and jingoism in the sphere of foreign policy. Given the grim conditions that obtain in the prevailing context, Habib believes that it may be worthwhile to ‘delve into the origins of nationalism as it was originally perceived by those who fought for the formation of the country’. The obvious reason for putting together such a diverse collection on Indian nationalism is to reiterate its essentially ‘pluralistic, inclusive and relaxed’ character in contradistinction to a monolithic imagination that holds sway today. The anthology is in many ways a cautionary note against the plausibility of a singular version of nationalism in India, especially of the type that is being championed by the ruling party.