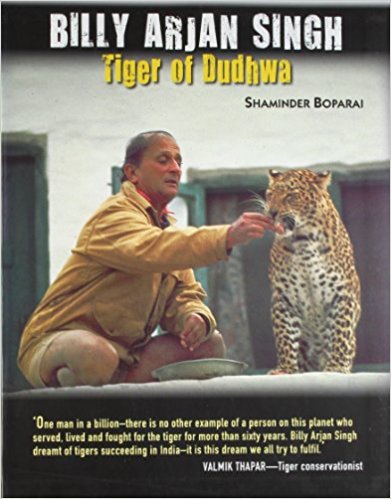 A number of books have been published on the life and adventures of ‘Billy’ Arjan Singh, both by Billy and his numerous admirers. This is as it should be, for Billy was one of the most remarkable conservationists the world ever knew, for his commitment, dedication and passion for the cause. The author mentions in the intro-duction that to him Billy was an icon and an idol and he was obviously very close to Billy in the last years of his life. There are, of course, certain advantages and disadvantages in such a situation. There may be a lack of critical analysis of the overall achievements and contributions of Billy but there is the insight of a devout admirer and a fund of information about Billy’s life and times, which would be a source of inspiration and nostalgia for a multitude of people who loved and admired him.

The author recounts the childhood and youth of Billy; his inevitable conversion from a hunter to a conservationist; the evolution of Tiger Haven and of Dudhwa; the experiments with Billy’s pets: Tara, Prince, Harriet and Juliette; his efforts to save the tiger, the swamp deer and Dudhwa and the constant battle with the Establishment that these efforts entailed and Billy’s last days when age had at last overtaken this redoubtable man. The author does not discuss the controversy which surrounded the success or otherwise of the release of Tara and of Prince into the wild, but restricts himself to Billy’s version of the story. Perhaps just as well. There are some factual errors in the narration, which could have been avoided if there had been more research. For example, the first enumeration of 1827 tigers took place in 1972 and not before the IUCN General Assembly at New Delhi in 1969, where Billy played a very important role with Kailash Sankhla and others, in drawing attention to the dire predicament of the tiger and where Billy’s article in the Cheetal magazine titled ‘Quo Vadis Felis Tigress’ became almost a theme song of the Assembly.