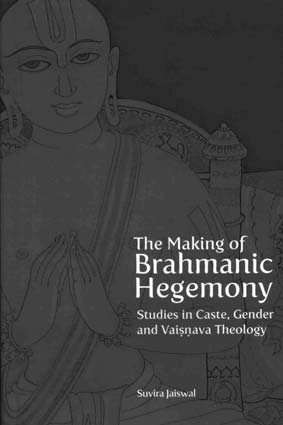 What makes a historical text ‘untimely’* or interventionist is the appearance of the text itself. In a time when the Indian polity and social imagination mark their presence as Hindu-centric, the liberal-multicultural analogy which nonetheless dominated academia since the colonial period falls short in explaining such communal assertion of the state and its people. It is, however, in such time we have a text like The Making of Brahmanic Hegemony: Studies in Caste, Gender and Vaisnava Theology, which becomes interventionist not only by critiquing at the core of Hindutva ideology but also by retaliating against the ideology which publicly maintained liberal and secular imagination while practised a Brahmanical Hindu religion in the domain of the ‘private’. Given the fact that a text can only be ‘untimely’ or interventionist in nature when it speaks the future (and here, the telos of it would be the establishment of a caste-less, gender-less just society through a dialectical process of unfolding) or escapes the linear notion of time, Suvira Jaiswal’s book is interventionist at many levels—it questions our imagination on concepts like caste, culture, or even gender, or to be precise, it seeks to redefine Brahmanism by taking recourse to a certain historical materialism. There are only movements in history and such movements are nothing but the activities of the oppressed, the subalterns, which are nonetheless hegemonized, appropriated by monumental history. The text of Jaiswal recovers such subaltern activities and empowers the oppressed by giving them history.