A Bleak Century Ahead? 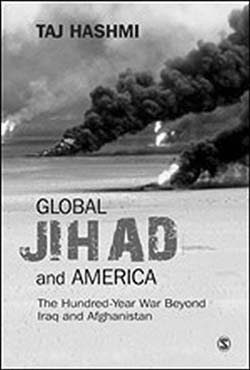 Taj Hashmi evidently utilized his four year stint at the US Department of Defence, Asia-Pacific Center for Security Studies in Honolulu, very well. He mentions conversations with student practitioners with service in theatres of the myriad and ongoing American wars. This lends a degree of authenticity to the book; in particular, its vehement critique of the manner the US has conducted its wars. While not being an apologist for the ‘enemy’, the Jihadists of various hues, the author’s thesis is that these wars have fuelled their own counter in the form of Jihad. This explains his pessimistic title about a world already in a hundred-year war.

Hashmi brings to bear his considerable knowledge of Islam, languages including Arabic, and South Asia to forcefully argue that there are no ‘good guys’ in this war. Just as there is no ‘good Taliban’, there are no ‘good Marines’ either. He does justice to the inspiration of the book, the victims of ‘unjust wars and terrorism’, writing with passion against both: unjust wars waged by the US and its many coalitions of the willing and terrorism perpetrated by Muslim extremists. While he outlines the problem many have suspected all along, he runs out of space to dwell on remedies, preventive measures that could potentially transform the bleak century ahead.
There are two villains in his book: the US and the Jihadists. He presents the US as a political system that feeds on violence. After being born in violence and expanding to its current borders by violence, it set the standards of modern wars with its civil war. Its political economy is one impelled by the military-industrial complex. Its capitalist oil guzzling economy ties it in an imperial embrace to the Middle East. The system of lobbies that runs Capitol Hill, and the salience of the Jewish lobby in American politics, ensures that US actions belie its professions of benign intent. American ‘exceptionalism’, to Hashmi, is a myth amounting to a propaganda tool. Even if Obama seeks to disengage, the ISIS led spike in the conflict in the Levant indicates that the flotsam and jetsam of the Bush years will continue to create geopolitical eddies into the future.
This creates the context that sustains and empowers the Jihadists. Whereas the ideological currents in Islam would have inevitably played out with the onset of modernity in postcolonial Arab and Muslim lands, their violent turn owes largely to geostrategic reasons. This was at two levels: one at the global level in which the Americans laid out the ‘bear trap’ in Afghanistan, and the second is in the Arab-Iranian—in its current avatar, Sunni-Shia—rivalry. The latter too is partially the outcome of US tutelage in that to contain a post-revolution Iran, the Shiekhdoms proved handy. This brings the story, simply told, up until the Iraq Wars. It has since gotten more complex with people power on display in the Arab Spring, that the US has taken care to undercut in Egypt, upturn in Libya and pre-empt in the Gulf. Whereas this is the visible strategic tip, the center of gravity of the iceberg is subsurface where intra-Islamic ideological wars unfold. Here, Hashmi provides some historical background that can help understand, what to him appears as, a date between the US’s Titanic and the Islamist iceberg.
Hashmi discerns two eyes to the unfolding and oncoming storm: one is South Asia and the other in the Middle East and North West Africa. In South Asia the ‘storm’ is possibly about to break with the Peshawar outrage against school children being the forerunner of more to come with the Americans departing the region worse off than the way they found it, even after spending about a trillion dollars. Obama was unable to follow through with the peace prong of his double pincer, the other being the ‘surge’. Though Holbrooke was a known hatchet man from his Balkan’s years, but past his prime, he died on the job. This shows up American appetite for war in contrast to its stamina for peace. Though Hashmi dwells on the rest of South Asia too, the Af-Pak problem is less likely to end up a subcontinent-wide problem than being merged with the widening arc of instability from the other eye of the storm, in the Middle East. The ISIS has emerged, yet again on account of external support including the US and its Arab minders, to be the most potent group. As hitherto, a divide and rule policy is in place to contain it. It is unlikely anything more can be done, since rolling back will require boots on the ground that the US, several times bitten by now, will ensure are not its own but those of its proxies.
This brings out the sense in the author’s contention that the present day threat is not from Islamism and terrorism as the West projects it, but from proxy wars, nurtured by the West. With its periphery in turmoil, and, if Hashmi is to be believed, likely to remain so for a hundred years, the only gainer is easy to spot: Israel. The proxy wars also stem from the incipient second iteration of the Cold War with the West and Russia facing off over Ukraine. The outcome of this is in further entrenching proxy wars such as the one in Syria.
Since the US is part of the problem, it is clearly not the solution. In any case, its solution is only military, one that has failed it and the rest continually. This is best exemplified by an anecdote Hashmi recounts. The military victor in Kosovo, General Wesley Clark, inquiring after US strategy from a uniformed colleague in the operational hiatus post displacement of Taliban from Kabul learnt that since military power was all the US had, to it every problem appeared to be a nail! Clearly, the war machine the US has created will not be cheated out of a war by China allowing itself to be co-opted into the global order. It needs an opponent, and lucky for its self-perpetuation, has created a formidable one in the Jihadists.
If their tryst is to be less bloody than the last hundred years or the previous Hundred Years War, then liberals in both America and in Muslim lands need first to win the intellectual battle within the two sides respectively.

Ali Ahmed is the author of India’s Doctrine Puzzle: Limiting War in South Asia (Routledge 2014) and blogs at www.ali-writings.blogspot.in. Views expressed are personal.