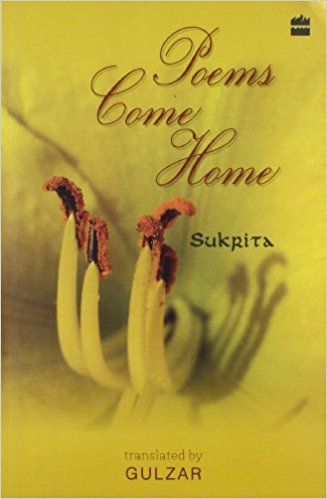 Poems Come Home is an uncommon piece of collaborative labour. Subtle in its nuances, sensitive in its portrayal, rhythmic in its power and stark in its simplicity, this bilingual book has poems originally written in English by the poet-critic Sukrita Paul Kumar, who uses the pen name ‘Sukrita’. These have been translated into Hindustani by the famous lyricist Gulzar.

In a recent interview Sukrita observed that her poems are born out of ‘the everyday turmoil… the intriguing dilemmas, social injustices… the pain of relationships, natural calamities, all this in the face of love, innocence and the beauty of say a sturdy oak in the mountains’. At the same time, however, she believes that one has to ‘realize the poetry lying somewhere inside oneself … a poem may be sitting on a blade of grass outside, in the eyes of a child begging, in the squeaking of the rat in cat’s paws or then, in the shadows of the long rain!’

The world portrayed in these poems is highly evocative of the many-sidedness of human life-particularly the pain of living on the edge coupled with a resilience that makes such living possible. Many of these are an outcome of Sukrita’s ‘experience of working with homeless people’.