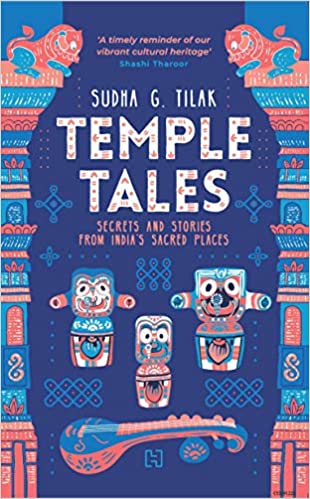 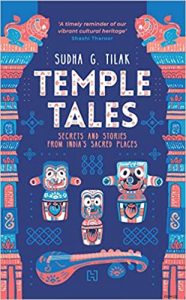 Let’s start with the captivating cover. Designed and illustrated by Sharanya Kunnath in a rather unusual blue and red combination, the cover displays the loveliness of Indian temple art.

The author, Sudha G. Tilak, says that temple visits were a huge part of her summer vacations and those visits taught her to enjoy the stories and art forms of India, both of which she has described in her book.

The book is divided into six sections on different themes: stories about the origin of chosen temples, signature food items of certain temples, the connection of temples with plants and trees, temples renowned for their sculptures, art forms connected to temples and lastly, dance and music representative of temple traditions. The author must be congratulated for encompassing so much in a not-too-thick volume. This is surely the first book of its kind for children and it can be a good resource for learning about Indian mythology, art and culture.

Indian mythology is replete with stories of gods and goddesses who had superhuman powers but often behaved in a very human way—jealous, angry, petulant, competitive, gracious, benign and merry in trun, resulting in some very interesting happenings. For instance, as Sudha Tilak tells us, the story behind the Somnath Temple in Gujarat is one of marital discord! Apparently, Chandra, the moon god paid special attention to one of his wives at the expense of others. The annoyed wives cursed him to lose his light. A dismal Chandra prayed to Lord Shiva to reverse the curse but as that was not possible Shiva did what he could and that was that the moon would go through periods of waxing and waning instead of losing his light altogether. The place where Chandra received Shiva’s blessings came to be known as Somnath and the Somnath temple stands there in all its grandeur.