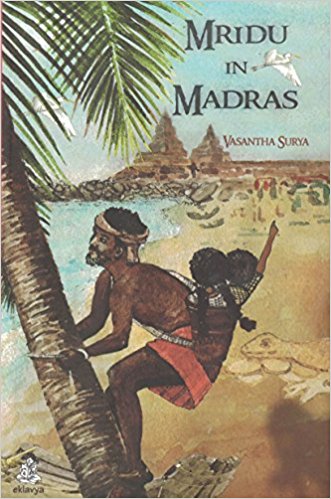 Vasantha Surya’s Mridu in Madras is an illustrated chapter book that is delightfully entrenched in Tamil culture and society. However, the book is not set in contemporary times and harks back to an era where large joint families were the norm, cycle rickshaws were common, and the price of commodities was way lower than what it is now. Madras was still Madras then and not the sprawling city of Chennai with its giant IT parks and overhead trains. The story revolves around a young girl, Mridu, whose parents are away in Muscat. She grows up in a busy household, among cousins and elderly relatives. What we get is a fairly authentic picture of life in those times and nostalgia for a childhood that was very different from what children of today in urban areas experience. There is an element of fantasy too—Mridu has a friend called Goruchaka, a boy wizard (inspired by the lizard on the wall), who speaks to her when she’s lonely or confused and also saves her from a spot of trouble. However, the fantasy remains firmly in the sidelines and the author doesn’t attempt to transport the reader to another world.