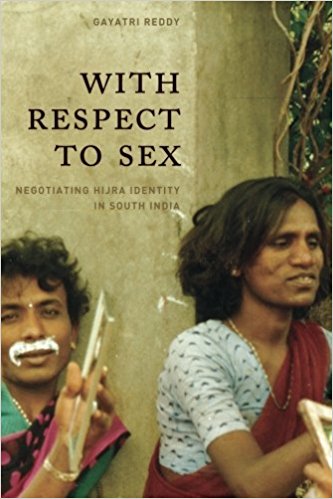 Gayatri Reddy’s book provides an important and thought provoking ethnographic study of a community of hijras in Hyderabad. The lives of hijras has so often been spoken about in narrow terms and confined to marginalized spaces. Hijras have invariably been discussed either through horrific stories of castration and anatomical difference or possessing fearsome religious powers that can both bless and curse those who do not respect them. Reddy’s book foregrounds the voices of the hijras, who have rarely spoken about themselves. She traces their history in Hyderabad from a position of royal patronage to the context of modernity, nationalism, and neo-liberalism. In the process of unpacking their complex identities and how these identities are mediated though class, religion, caste, region and hierarchies of respect, Reddy’s book illustrates how hijras raise significant questions about nationalism, citizenship, religion, class, sex and economics.

The book constitutes one of the sexuality series brought out by Yoda Press, to provide an understanding on how genders and sexualities shape our lives, and the world. Reddy discusses how the hijra has become the focus of the western scholars gaze as the quintessential ‘third sex’, who is represented as a heroine in global sexual resistance. Yet the hijras themselves, who are for the most part men who wear female clothing and renounce sexual desire through a process of sacrificial emasculation, express a low grade irritation over having their ‘minds eaten by firangi (foreign) people’. They have become mere objects in the global knowledge market, rather than participants and subjects of their own lives. This intense scrutiny of their lives and practices has had both beneficial as well as adverse consequences for hijras. It has increased the visibility of hijras hitherto marginalized in Indian society, while at the same time drawn the unwanted attention of law enforcement as well as morally conservative groups and individuals.

The representation of the hijra as defined exclusively through sexual and gender differences is directly challenged in this text. Reddy explodes this linear and narrow focus through the relation of real life stories of this community. She reveals how the community is constituted by practising Muslims and Hindus, sex workers and ascetics, gurus and their chelas. The extended hijra families and kinship systems are sustaining and integral to the lives of these subjects. They have never fitted comfortably within the politics of the international and national gay and lesbian movements, which is invariably and exclusively defined through sexual identity. Instead, we find a rich tapestry of varied lives, where the hijras are revealed as breadwinners, dancers, artists, friends and people.

The focus of her study is on the lives of a group of approximately 35 hirjras living under the water tanki less than a mile from Secunderabad. They live in five independent tents, and each person belongs to a group of three or four hijras with a guru. While they try to maintain smooth relations with the surrounding community as they live on government land, there is a constant tension resulting from the fact that many of the hijras are engaged in sex work. Ultimately the group was evicted in 1999. Since then six of the original group have died, most of them from AIDS.

Reddy’s careful and gradual interaction with this group enabled her to develop an understanding of the central importance of izzat or respect in the constitution of the hijra’s identity. She explains how the group of hijras she interacted with has striven to authenticate itself within the parameters of a local economy of izzat. The hijra locates herself largely within the broader category of the koti, who are equivalent to effeminate men. All the kotis are differentiated in terms of genital excision, religion, clothing, kinship and class.

The book focuses on how the hijras and kotis construct experience and enact their individuality not exclusively through sexual difference, but also through a multiplicity of social differences, including corporeality, religion, gender, dress kinship and class. Reddy exposes how the hijras’ constant ability to cross-border challenges, essentialist notions of the nation-state, political and social citizenship and sexual identity. It is a unique identity which is derived from multiple spaces including Gandhian nationalism, Hindu iconography and Islamic ritual practice. The remainder of the book examines how each aspect of koti/ hijra identity is used in complex ways, rendering her identity ambiguous. Izzat remains the central organizing concept through which the identities and status of hijras and kotis are constantly negotiated. While kotis appear to differentiate themselves in sexual terms, that is, physiology, in particular, the fact that they are the penetrated effeminate partners, and they also align themselves with women, this is not the central difference, but simply one axis of difference.

Reddy’s intricate analysis embeds the issue of sexual identity within a south Indian context and delinks it from the caricatures and sensational representations that dominate western scholarship as well as bollywood cinema. The analytical depth is a refreshing change from activist work that often fails to link the sexuality of hijras to their broader context and multiple identities. Reddy’s book also raises the level of the ethnographic work to a political challenge, identifying the ways in which the lived experiences of hijras disrupts and destabalizes dominant assumptions about normality and morality that is so randomly and unthinkingly uttered by Indians themselves on what constitutes ‘Indian culture’ and distinguishes us from the West. The thick layers of meaning attributed to hijra identity do not simply fall into western categories of sexual minorities, but offer deep and challenging insights into how complex and layered in fact Indian culture is and how the rebellious and dissident spirit is a hallmark feature of this culture as is its pluralism and non-essentialism.

Reddy provides meticulous details about the complex ways in which the multiple identities of hijras in fact live their lives, and in the process, constantly forces the reader to interrogate her/his own assumptions about the role of sexuality within the Indian context. It also challenges some of the binaries and rigid oppositions that so often characterizes scholarship on sexuality within the Indian context. It is a book that is distinct from most others that have preceded her work, insofar as it foregrounds the voices of the hijras, without essentializing them, provides insights into their own sharp analysis about their lives, sexuality, culture, religion, izzat as well as the body. In the process, Reddy is able to challenge the notion that hijras are ‘just different’. Indeed a good deal of the book addresses how hijras are not just a `third sex’ or abnormal or different. Their stories reveal how they cannot be reduced to such simple and singular descriptions but can only be understood when we understand how hijras are constantly engaging with normative understandings of class, caste, religion as well as with location and language. These insights provide an important lens of analysis in a context where Hindu majoritarianism insists on constructing Indian culture as homogenous or where sexuality is constructed along rigid lines of normality and abnormality. Reddy’s book indicates how hijras never simply speak in terms of gender and sexuality, but also as Hyderabadis, as well as practising Muslims or Hindus, performing the religious rites of both faiths, as well as sex workers, ascetics, gurus and chelas, members of extended hijra families and kinship systems.

Reddy’s book is a valuable text that is important in a context where references to singular identities and homogeneity appear to be the dominant way in which to talk about who and what constitutes the ‘real’ or authentic Indian. Difference from this dominant construction is cast as inferior, abnormal or threatening and can justify discrimination, violation, humiliation and even annihilation. With Respect to Sex reminds us how intersectionality characterizes all our lives, and it remains the resounding strength of this book.