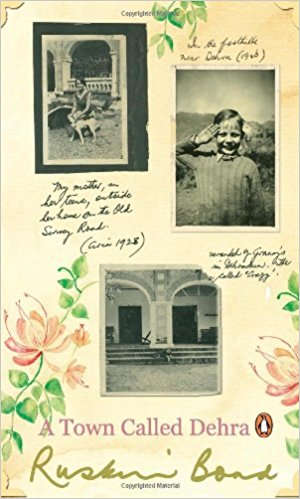 A Town called Dehra is an ode to the delightful town, formally known as Dehradun, and those salad times that have long since disappeared. Autobiographical in nature, this collection of memories are evocative of horse-drawn tongas, gramophones and vinyl records and singers of forgotten genres like Nelson Eddy, Gracie Fields and Arthur Tracy. Describing his childhood and youth, Ruskin Bond is at his vintage best, showing his wry humor, his sometimes haunting and poignant writing, alternating with his ready wit and amazing zest for life. In the book he details his beloved town as it once was, with lush gardens, gurgling mountain streams and wonderful litchi and guava trees. One could go out for walks in early winter sunshine and lose oneself in the forest out of town. Get caught in a sudden downpour and one could just as easily thumb a ride back to town on a bicycle for four. Or one could climb up a banyan tree and be lost to the world.

An amusing read is the story titled ‘Living without Money’. Evoking memories of P.G. Wodehouse, the story recounts the tale of William Matheson, a Swiss journalist whose remittances never seem to turn up, Colonel Wilkie, who walks with a limp because the bookshelf fell on him and Mr Madan, who ‘dealt with second hand cars which no one wanted.’

Ruskin Bond brings a lump in the throat on describing his last tonga ride. Financial difficulties after the death of his father cause the house in Dehra to be sold and he leaves for England with his grandmother. On sighting a shooting star he makes a wish. In Ruskin’s writing much is necessarily left unsaid.