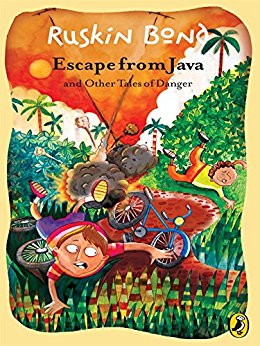 Once again I have a bundle of books to review for the Children’s Special issue of TBR. Once more the books have nothing in common. There is no unifying theme, no single target group. When publishers are regressively dividing readers according to gender (pink books for girls; action books for boys), it’s great to have a bunch of books that are not specifically for one gender or another. But the quality is uneven. The best thing would be to review them separately, starting with the Puffins. In fact, I only have Puffins, which is a bit strange at this time when publishers are developing YA lists. Ruskin Bond’ Escape from Java and Other Stories of Danger is a collection of five stories, including ‘A Flight of Pigeons,’ a love story set during the Mutiny of 1857. An Indian landlord gives two English women shelter. The Indians’ hatred for the British seeps into the haveli but the Indian host stands by his hospitality—I have not given shelter to two angrezans, he says, but to friends. Escape from Java is set in World War II. Ruskin Bond’s stories about a community and a time he knew well are among his best, largely (I think) because he evokes a lifestyle through well-chosen details. In this story, it is 78rpm records of Harry Lauder and Gracie Fields. An attitude and a personality are caught in Mr Muggeridge complaining about the rain (Give me the English rain any day, he says), when he is back in England where he has longed to be, he sends postcards saying the English rain is awful.