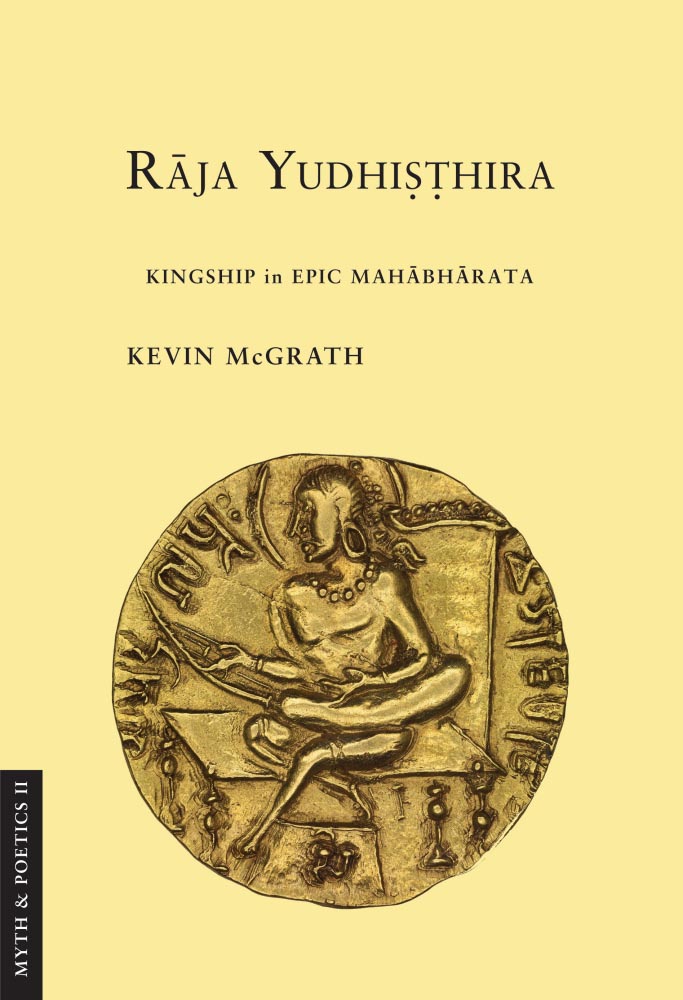 Kevin McGrath’s analysis of Yudhishthira’s complex personality is refreshingly free from hagiography; at the same time, the text balances lucid scholarship with a compassionate, nuanced view of its subject.

McGrath points out that neither of the warring sides of the royal Hastinapura clan (Pandavas and Kauravas), wins in the end—rather, it is Krishna’s Yadava lineage that achieves lasting success.

At the heart of McGrath’s study is the complex, often conflicted character of Yudhishthira, riddled with many paradoxes. Despite his status as the son of Dharma (Yama), his gambling weakness leads to the loss of his kingdom and the humiliation and abuse of Draupadi. An ambitious king, Yudhishthira is strongly drawn to ‘unkingly’ non-Kshatriya virtues like nonviolence, renunciation and forgiveness. So much so that Draupadi (who is often cutting in her harsh judgments), calls him a ‘kliba’ (an emasculated man).

Despite Arjuna’s initial depression about the war at the start of the Bhagavad-Gita, 18 chapters of Krishna as counsellor cause him to morph into a killer war machine.

In the end, only Yudhishthira grieves the carnage on both sides, weeping and praying for the souls of dead Pandavas and Kauravas alike.

McGrath argues that the concept of kingship in the Mahabharata is fraught with tricky dualisms, and with the pairing of the king and his shadow Other.

There is the Krishna-Yudhishthira binary and then the glaring self and Other dichotomy between Yudhishthira and Duryodhana.

However, the dual, twinned kingship of the Mahabharata, is not simplistic—the binary polarities are deeply interconnected and don’t stand in any nakedly oppositional antithetical relationship.

Thus, Yudhishthira the ‘good guy’ is deeply flawed, while Duryodhana at his best, is seen as a hero mourned in the moment of his death.

‘It is as if the universe itself cries out in anguish. Such is the strange and almost inhuman quality of the Kaurava king’ (p. 81).

When Duryodhana lies dying, ‘the poets describe that pregnant breezes moved and a great shower of auspicious smelling flowers fell’ (ibid.). Duryodhana’s kingship claims (power hunger aside) are quite legitimate from a patrilineal perspective, since the Pandavas have no human fathers. His tragic flaw: the abuse of Draupadi, for which he pays dearly.

One of the key themes of McGrath’s research—Bronze Age concepts of kingship—are deeply anchored in a communitarian framework, such that the king operates in relation to a larger social matrix (the sangha). McGrath claims that monarchy in the sense of a single, authoritarian focus of rulership was a latter day deterioration.

Yudhishthira’s relationship to Dharma is a complexly ambivalent one. True, he is the son of Dharma, and yet he has character flaws. His one ‘white’ lie about the death of Asvatthaman, causes his chariot (thus far at an elevation of four fingers above the earth), to descend solidly to the ground. Perhaps Yudhishthira emerges most clearly as Dharmaraja in his confronting mortality and grief, as his companions fall away and die, one by one. His sole companion is a black dog. Yudhishthira refuses to enter heaven without the dog, who reveals himself as none other than his father—Yama, the god of death.

McGrath’s work lacks the bold sweep of a more comprehensive treatment of the Mahabharata. Yet, his small compass work, confined to Yudhishthira and the kingship motif in the Mahabharata, accomplishes its more modest aim rather well.

The book is likely to attract the intelligent lay reader as well as the academic scholar, in that McGrath tackles the concept of kingship in the Mahabharata cogently, and yet with passion.

Raj Ayyar is Visiting Professor of Humanities and Social Sciences at IIT-Delhi.