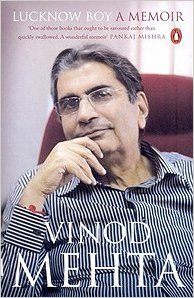 Poet and essayist W.H. Auden once remarked that every autobiography is concerned with two characters, ‘a Don Quixote, the Ego, and a Sancho Panza, the Self’. Vinod Mehta’s literary self-portrait Lucknow Boy fits the description quite well. Only that in this memoir the two characters never appear together, at least not on the same page. First we are introduced to the Self, the boy from Lucknow who spends his days loafing or ganjing around Lucknow’s busy galis and bazaars, and before long he finds himself on a flight to London with nothing more than a ‘BA Pass Third Class’ degree in hand. And then this boy, the Self, disappears from the stage, and we meet the Ego, the editor, who is at home in the company of the nation’s power elite, a goodhumoured chronicler of the life and times of the metropolitan 400 of the financial and political capitals of India. In that sense, there are two books in Lucknow Boy, it is one part memoir, an account of the wonder years of Mehta’s life in Lucknow and London and one part political diary which covers Mehta’s experiences in Bombay and Delhi as a professional mediawallah.