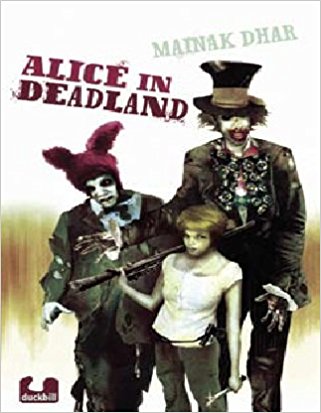 Alice would not have been surprised to find herself in this apocalyptic war zone teeming with ruined cities and mutants. Other satires such as Malice in Kulturland and Malice in Blunderland give ample evidence that there is something about Alice and her mad world that invites you to extend it into your own. Mainak Dhar does it quite ably in his post-nuclear fantasy where his newly minted Alice carries her spunk well into a Call of Duty sort of gaming territory.

Parodying the opening lines of the original : ‘Alice was beginning to get very tired of sitting by her sister on the hill and having no Biters to shoot. Once or twice she peeped through her sniper rifle’s scope, but could see no targets. “What is the use of an ambush,” thought Alice, “without any biters to shoot in the head?”’ establishes the frame of what is to follow.