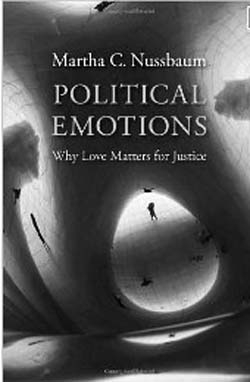 In Political Emotions: Why Love Matters for Justice, Nussbaum argues that societies aspiring to justice must not only frame their policies according to reasonable principles of justice, but that such societies must also cultivate political and public emotions, like that of patriotism, in their members. Principles of justice demand that we treat others fairly; we, as citizens, are able to meet this demand only when we feel an emotional attachment to our fellow citizens and are concerned about their welfare. That is how ‘love matters for justice’—our emotions are the force behind our moral principles, or as Nussbaum puts it, we always need ‘some type of emotional support for good political principles’ (p. 222). Nussbaum presents the United States and India as two societies aspiring for justice and culls their history for examples of how the political emotions were, and are, cultivated in these countries. She cites the policies, speeches, as well as the dress of leaders like Gandhi, Nehru, Washington, Lincoln, F.D. Roosevelt and Martin Luther King, Jr., as having the effect of strengthening the feeling of oneness in Indians and Americans. The emotions of the people are fostered not only by rhetorical devices like the speeches of political leaders, but also by public architecture; so Nussbaum goes on to describe several monuments and memorials in America, and places like the Millennium Park in Chicago and Central Park in New York city in terms of how ‘magical’ spaces like these construct certain ‘attitudes and emotions’ (p. 300). As a counter example of what should not have been allowed to happen, she discusses the decline of old Delhi and the creation of New Delhi as a city, which, ‘with its maze of geometrical but still barely intelligible streets, inspires fear’ (p. 331).