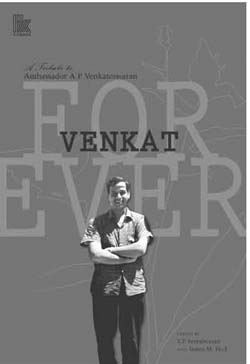 This is not just a tribute, as suggested in the title, it is a ‘labour of love’ undertaken at speed by a former admiring junior colleague and Venkat’s one sonin-law, and motivated, as the editors elaborate in an introductory note, by the conviction that the hero of the volume was such a unique person that he should be remembered forever. The contents generally justify that introduction, for it ends up between analect and anthology, with a marked emphasis on the former. It has, of course, been well publicized and received praise; released originally in Bangalore, it was then presented to the Sharjah Book Fair, then released again by the Dalai Lama.