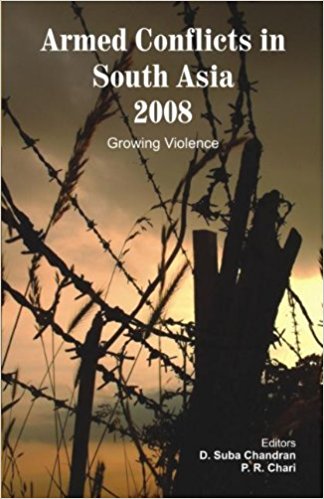 This book is the second in the series of annual publications which will cover conflicts in South Asia. This is an admirable effort and as things stand the series is likely to continue for years to come. One of the editors in his prologue has raised the issue as to the areas of conflict that should be covered and whether conflicts in Myanmar and China would also come under the broad rubric of Southern Asian conflicts. While no doubt the nature of conflicts in China and Myanmar are of the same category as in the South Asian countries, the editors have very rightly limited their study to the eight SAARC countries. They have more than enough to write about violent conflicts in six of the eight countries of SAARC, the exceptions being Maldives and Bhutan. Nine chapters have been devoted to reportages of conflicts in the six nations—Afghanistan, Pakistan, India, Nepal, Bangladesh and Sri Lanka. While Afghanistan, Nepal, Bangladesh and Sri Lanka are dealt with in one chapter each, Pakistan gets two chapters and India three.

In the case of Pakistan the Shia-Sunni sectarian conflicts are dealt with separately from the tribal insurgencies in the FATA (Federally Administered Tribal Area). In the case of India the violence in Kashmir, the Naxalite problem and the North East insurgency are  analysed in three chapters. Except in one case, Suba Chandran who has dealt with two chapters and in another, where Left extremism in India has been studied by two others, each conflict situation has been studied by a separate author. Yet the editors have succeeded in getting the authors to adhere to certain uniform standards of analysis in respect of the subjects of study. The result is a very objective reportage with adequate data collection and unbiased conclusions. The editors are to be complimented for their overall direction of the project.