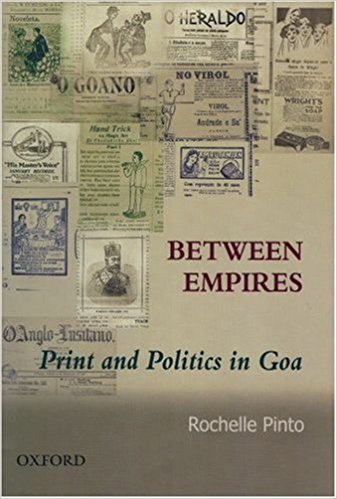 Relief and pleasure should greet the work of Rochelle Pinto in the area of Goan studies. Finally we have serious academic research being published and reviewed by mainstream publishers and periodicals. For too long Goan studies have been confined to the periphery unless noticed in seminars or publications devoted to Indo Portuguese studies. Pinto has also been retrieving some of the recent work on Goa for a wider readership. Between Empires – Print and Politics in Goa covers in depth a whole range of issues that illuminate the difference between societies, nationalist struggles and print culture that evolved in areas under British and Portuguese rule. With the advent of Constitutional Monarchy in 1822, an educated elite influenced by the liberalism of the European Enlightenment emerged; it was a time when ‘old ideas were violently thrust aside in favour of the new, and when the proclamations of the French Revolution and the principle of popular sovereignty had proved victorious.’ Goans experienced the potential for self expression including in issues of governance and responded with a flurry of publications.

Rochelle Pinto points out that print was immediately politicized ‘to consolidate oppositional identities of language, class, and caste rather than forge unities across them.’ The title suggests, that Goa was left undefined between the two empires, with writers and readers perceiving their society in relation to the one and then to the other. Goans had been granted limited franchise since mid 18th Century on the basis of income and religious affiliation. They were citizens whereas people in British India were subjects of the imperial power. They had received the spirit of the law, the spirit of equality and individual rights – a subliminal sense still marks Goan society today. This idealism energized the intelligentsia of the time who expressed their vision and hopes in the polemics of 19th century journalism. They strode and wrote as equals of those in power. For a brief period, a Goan, Bernardo Peres da Silva held the position of Prefeito, Chief Administrator in 1923; he tried to introduce radical reforms before vested interests within the local Portuguese officials and army, dislodged him. Soon enough people became aware that Goa lacked the modern apparatus of government and the state set in place by the British system. Unemployment and unwillingness on the part of manipulative or weak administrations to realize the human potential enshrined in visionary legislation led to disillusion and migration to British India as also to British and Portuguese Africa.

Whereas the Portuguese educated elite burst into print in Portuguese, the working class migrants in Bombay wrote in the mother tongue, Konkani. The book examines available literature on print, reading publics, and linguistic hierarchies in Goa and elsewhere to illustrate the possibilities opened by print media and the manner in which it affected social, cultural, and political ties within Goan society.

It reveals how this highly contested public realm was deeply reflected in the novels, pamphlets, and newspapers produced by the Catholic elite within Goa , by Goan migrants in Bombay, and litigants in the rural districts in the nineteenth and early-twentieth centuries. Whereas the urban elite expressed dissent against colonial policy and administration, print became a weapon used by sudras – with the benefit of education in parish schools in Konkani and with improved economic conditions as migrants in Mumbai – to fight caste discrimination particularly in relation to ownership of land.

Indeed pamphleteering in both languages and litigation could be said to have become a way of life. Anti colonial dissent of the urban elite, who wrote only in Portuguese, was continuous and intense; yet, as Rochelle Pinto points out, when confronted by the state the journalists, who were often members of the bureaucracy, compromised with clarifications that their dissent did not constitute a rebellion against the state. Thus a powerful press fell short of an avowed nationalism. Later in the early 20th Century with the dictatorship of Salazar, the most powerful dissenters were muzzled, there was press censorship and no civil rights.

Detailed studies of the emergence of various forms of print discuss how questions of representation, genre, publicity, and literary history followed different trajectories among the non-elite and elite writers. Research of a variety of sources – newspapers in Portuguese, Konkani, Marathi and English, novels in Portuguese and tiatr ( theatre) in Konkani, historiography, memoirs and reports – brings to light for the first time the expression of a vibrant, literate society both in Goa and migrant Goans in Bombay. The importance of the work lies in the way Rochelle Pinto sifts these various currents of opinion and ideas to illustrate the nature of an identity, and indeed the contemporary anxiety about identity – one that was born through exposure to influences other than Portuguese colonialism.

Goans are many things since they have been a part of several kingdoms before the arrival of the Portuguese, and have been exposed through trade to avenues for migration before the arrival of Vasco da Gama and Robert Clive. Hence the book quite rightly steers away from trying to fix the Goan experience into moulds of postcolonial discussion of the Indo British colonial encounter. And although it is clear that Pinto has made a study of Brazilian academic post colonial theories, Goa cannot be examined in this category either since the Indian basis of Goan culture is a central component of all discussion to do with identity and culture.

One of the most interesting dimensions of this work is its detailed analysis of the use of Portuguese, Konkani and Marathi , and later of English in education. Since the object of colonization was economic and social control through the process of conversion, the mother tongue, Konkani, was banned in 1684; the language was perceived as a “ carrier of pagan culture and cultural memory”. It was revived by the English Jesuit, Thomas Stephens, and later, when some Goans joined the priesthood parish schools catered to the working classes teaching them Konkani in the roman alphabet, catechism and music. This is why Goans were among the first employees the British found in Bombay who already knew the roman script. Indeed with migration, the importance of English led to the establishment of private English schools in Goa.

The Hindu community kept away from Portuguese education more or less until 1910 when the birth of the Republic separated Church from the State. During these centuries Marathi became the language for this group with teachers from Maharashtra employed in schools run in private homes. Rochelle Pinto points out that Konkani speakers were ‘systematically disempowered …. [T]he shifting power of the three languages also raises questions about the kind of hegemony enjoyed by their different proponents.’ The research illustrates the ways in which the Hindu community supplied official translators, and though disempowered in the realm of culture and religion, was able to gain the upper hand in the economy of the entire territory and in the administration of the vast area of the New Conquests (acquired in mid and late 18th Century) where the old order of conversion and social control was abandoned.

Since these areas needed to be administered and Portuguese was not acceptable to the population, the colonizers were compelled to acquiesce to demands for primary schools in Marathi run by the State and by 1875 it was a subject in the Lyceum. The order of the reformist Marquis de Pombal in 1759 that Konkani be taught in schools was never followed. The spread of Marathi education helped in administrative matters but did not pose a threat to colonial rule. Konkani united the population with its emotive connection with Goan identity. Its suppression diminished potential threats to the stability of the state. Rochelle Pinto’s analysis does not adequately discuss all the implications of the pernicious effects of colonial language policies. Her comments on the role of the Portuguese educated elite who, she feels, did not insist on ,primary schools in Konkani seems to me to diminish the insidious role of the colonial power in the impoverishment of Konkani as language and as source of economic and political power.

Although the argument that the Catholic elite embraced Portuguese language and culture, which they did in order to seek advancement in education and employment – much as the elite did in British India who embraced English education – is an indisputable fact, the occasional conflation of the language issue with class, caste, and land issues blurs the reality of the times. Perhaps the theoretical framework of Rochelle Pinto’s analysis has led to such a confrontational picture. A more nuanced approach would have done justice to the fact that Konkani never died – the households of the Goan elite were bilingual as were those of the elite in British India.

A.K Ramanujam has famously written of having heard English in the drawing room, Tamil in the kitchen and Kannada on the street. It would have been Konkani in Goan kitchens and dining rooms as also on Goan streets. Portuguese only in the drawing room. Women from the upper classes did not speak Portuguese until the late 19th Century or early 20th Century. Indeed, Rochelle Pinto has analysed the novel Jacob e Dulce (1896) in which the writer, Francisco João da Costa satirises the malapropisms and mannerisms of his own class in their attempts at adopting the Portuguese language and mores of what they perceive as high culture.

Although Between Empires examines all aspects of print and other cultural expressions it does not mention the mando the pre eminent musical creation of the Goan Christian community, born precisely at the moment when gentrification, social ambition and political awareness of the Christian elite gave birth to a homegrown culture in the 19th Century. The upper classes who absorbed Western influences transformed their food habits and dress, their forms of celebration and their music. The mando’s combination of the mother tongue to express deep emotion, the beat of the ghumat, imagery and incidents related entirely to Goan life with melody and rhythms of European influence, is unique to the period and the class that created it. Although mainly songs of love and courtship, there were also mandos inspired by political issues, news and events, including treaties between the two colonial powers perceived as a betrayal of Goan interests in collusion with the British empire. These mandos, witty, poignant and topical, could be said to be the musical counterpart of pamphlets. How, then, could this elite in the nineteenth century who are said to have given up on the language produce an art form in Konkani which is so central to today? ( There are annual mando festivals and competitions).

Ignorance or misinterpretation of differences between policies and their repercussions in the two empires have been detrimental to perceptions of Goan society both in the academic world and in society at large even within Goa itself. Rochelle Pinto’s discussion of the development of print culture and its implications regarding the birth of nationalism, modernity, and colonial politics, albeit in language too academic to be easily accessible, will greatly enhance awareness of the complexity of colonial experience and rectify at least some of the misconceptions of Goan society.